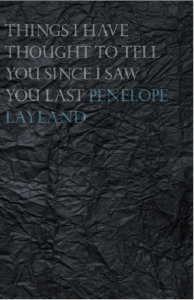 CANBERRA poet Penelope Layland has been shortlisted for the $30,000 Kenneth Slessor Prize for 2019 for her latest collection, “Things I’ve Thought To Tell You Since I Saw You Last”, published by the local Recent Works Press.

The Slessor Prize is awarded annually as part of the NSW’s Premier’s Literary Awards, and judges commented:

“Some collections have a resonance well beyond the turning of the last page. Layland’s is one of these books. This understatedly slim volume of elegiac poems punches well above its weight in count of words — sensitively and insightfully dealing with the riddling intimacies of grief…. This book is a triumph of discernment and understanding.”

The winner will be announced in Sydney on April 29.

Meantime the “Australian Book Review” magazine tells “CityNews” that ACT poet John Foulcher is on the shortlist for the $8500 Peter Porter Poetry Prize, for which 900 poems were received.

The winner will be announced in Melbourne on March 18. After readings from the work of Peter Porter by colleagues and admirers of the late poet, the shortlisted poets will introduce and read their poems.

CityNews - May 12, 2021
0
REPORTS from inside the Alexander Maconochie Centre tonight (May12) say there is a prison riot of male inmates underway.