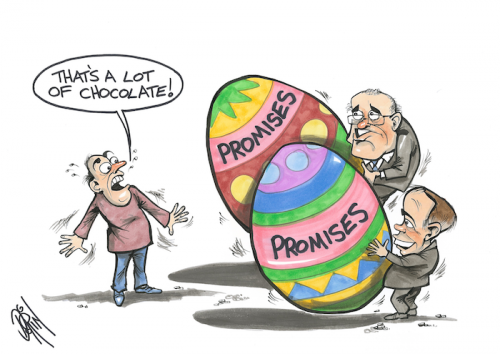 LIKE war, the first casualty of an election is truth. The propaganda has already started. The first salvo from the government is a blast on who can manage the economy. Prime Minister, Scott Morrison, says it has taken them five years to repair the economy because, apparently, Labor left the country in ruins.

Mr Morrison may not be stooping to World War I tactics presenting Labor as eating babies. However, he has already launched into the politics of negatives and fear, arguing we were much worse off six years ago under Labor.

Liberal propaganda offers “a stark choice” between his government and a “Bill Shorten Labor Party”. While Bill Shorten lags in personal support in the polls the Liberals attempt to frame the conflict as between themselves and Bill Shorten rather than between Labor and Liberal for government.

The truth is a casualty in the reframed message in two ways.

Firstly, Australia does not run presidential elections. No-one in Canberra will vote for Bill Shorten or Scott Morrison. That is up to the constituents in their own electorates. Canberrans will vote for our own local representatives who, in turn, will choose the prime minister, as the “first amongst equals”.

Secondly, leader-focused elections may have been better for the major parties in the era of mass media. The leader of the major parties heads the campaign, the rest are told to shut up, and the media is dragged into a two-person contest. Note how quiet backbench members have been in the pseudo election campaign that has been running for months.

This deliberate strategy lets the two major parties keep the media focused on the battle between themselves as the titans with the crossbench hopefuls largely eliminated. Choosing our own representatives has become much more difficult as local candidates are able to gain so little media. Where independents like Cathy McGowan in the electorate of Indi have been successful is in moving from the mass media to skilful use of social media.

ABC reporter Brett Worthington pointed out, as parliament was prorogued, that Mr Morrison “channelled former prime minister John Howard and the ‘who do you trust’ campaign slogan he made famous during the 2004 election”.

While both sides are telling lies (politely framed as propaganda) the question will be, can any of them be trusted?

The Liberals and National parties remind us that they have brought the budget into the black. Another casualty of truth. Australia does not yet have a surplus. Somewhere in the forward estimates there is a surplus predicted. We certainly have had a temporary reprieve based on a rise in commodity prices. This was luck, not good management. However, both the government and the opposition are on an election spending spree as though there is a sustained long-term surplus. Who should we trust?

Like Lazarus arising from the dead, the Labor Party has been using the famous Whitlam slogan of “It’s time”. Labor wants to frame the Liberals as unstable, asking who will be prime minister in a year’s time if they win government. Tony Abbott brought the Liberals to government six years ago. Malcolm Turnbull was the leader at the last election and now the party has opted for Scott Morrison – after a failed coup intended to elevate Peter Dutton.

As Labor is not in government, it is forced to run both a vision for the future and a negative propaganda campaign. It knows how effectively its campaign to protect Medicare worked at last election. Now it is attempting to frame Medicare as a Labor positive with a huge promise around its role in treating cancer. They have also presented policies on negative gearing and franking credits to achieve a “fairer Australia”.

Labor’s prime negative pitch has already commenced in exposing Liberal and National Party infighting. The battle between the conservatives and socially progressive liberals is barely kept in check, even within the election context. An unstable, divided party can never win an election. This is a vulnerability Labor has already commenced exploiting.

Electioneering on the politics of propaganda, negativity and fear is a proven formula. However, our democracy and politicians across the spectrum are the losers. The key lesson from current electioneering is that deception, lack of vision and negativity dominate political life. Voters draw the obvious conclusion: our politicians are disparaging people who are not to be trusted.

CityNews - January 20, 2020
0
AS sun returns late this afternoon (January 20) it's hard to imagine that only a few hours ago Canberra was under assault from a roaring thunderstorm of dangerous and damaging hail and rain.