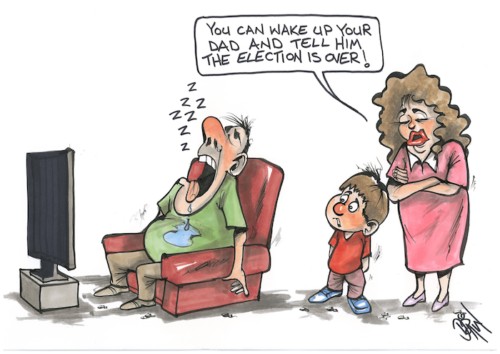 THE election result should remind our politicians of three things: trust and respect are critical, their positions simply cannot be taken for granted and, most importantly, our democracy does work.

Trust is diminished when the Prime Minister attempts to perpetuate the notion that he single-handedly won the election. It is a brazen attempt at increasing his own power.

The election was littered with pork-barrelling, lies, mendaciousness, distortion, misinformation and fake news, as I set out in my previous  column in “CityNews”.

The Liberal Party, with the backing of the mainstream media, largely ran a presidential style election. It was rare to see anyone other than Morrison in the media for his party. Although Labor did put up a range of shadow ministers, the election was still framed as a simple leadership competition.

Social media has been alive with disappointed voters since the election. Winners don’t feel the need to comment as much. Some wonder if our democracy is serving us well and look for an alternative form of government. Some feel disenfranchised. This reveals the real challenge for all types of governments is not about how well the majority is served. The real challenge is how well the most vulnerable are served, protected, supported and nourished.

Recent Australian governments have not done this well enough. Things are improving for Aboriginal and Torres Strait Islander people in a range of ways – although there are still many challenges. Having refugees who are indefinitely in off-shore incarceration is an international embarrassment.

The temptation is to look for a better form of government. Some argue for direct democracy as used in Switzerland and some states in the US. On face value, power is transferred from political representatives to the people. However, the risk is establishing a “tyranny of the majority”.

British prime minister Winston Churchill summed up the dilemma when he told the House of Commons on November 11, 1947: “Many forms of government have been tried in this world of sin and woe. No one pretends that democracy is perfect or all wise. Indeed, it has been said that democracy is the worst form of government except for all other forms that have been tried from time to time”.

I have regularly repeated in this column that in politics we are generally making the “least-worst” decision or choice. Even so, there are many things that can be done to lessen the problems of our democracy. Transparency in political donations is the first cab off the rank. A restriction on the level of donations would also enhance our democracy significantly.

An investigation by “The Guardian” in 2018 found up to 40 per cent of political donations for the previous year (around $62 million) were not declared.

Unacceptable! Perhaps attitudes to the use of water in the Murray Darling Basin, the enthusiasm for fossil fuels and reluctance to support renewable sources of energy might be better understood if it was clear where those donations originated.

The real lesson from the last term in politics and the recent Federal election is the importance of trust. A way must be found to get past raw political gamesmanship. Otherwise, trust in our democratic institutions, and particularly our parliaments, will simply wane.

University of Canberra Professor of Governance, Mark Evans, offered some dire warnings in an article published in “The Conversation” in February.

“By 2025, if current trends continue, fewer than 10 per cent of Australians will trust their politicians and political institutions. The result will be ineffective and illegitimate government, and declining social and economic wellbeing”.

He concluded: “Whoever wins the 2019 Federal election must address this problem as a matter of urgency”. I am not holding my breath.

CityNews - March 9, 2021
0
Reader ANNE QUINN, of Wanniassa, says 43 years of community access was extinguished without a thought for the locals when an unannounced two-metre-high, locked fence surrounded the oval at St Mary MacKillop College.