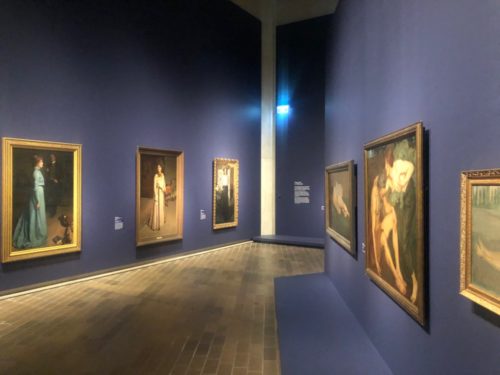 A RETROSPECTIVE of the work of early 20th Century Australian artist Hugh Ramsay has been unveiled today (November 29) at the National Gallery of Australia.

Ramsay, who died at age 28, was a child prodigy who attended art school at 16 and then travelled to Paris, where he absorbed lessons from the works of great painters such as Diego Velázquez, John Singer Sargent and James McNeill Whistler.

Four of his works were selected for a new Salon exhibition at the Grand Palais in Paris, unprecedented for a young Australian artist, three of those  “Salon” paintings are on show in the retrospective, while the fourth work has never been found.

Curator Deborah Hart, head of Australian art at the gallery believes he should be remembered for his prodigious talent rather than for what might have been, saying: “From his early days at art school, Ramsay was admired and respected by his peers for his incredible skill, but his thoughtful, contemplative portraits and figure studies deserve a much greater audience.”

This morning at the gallery Mitzevich acknowledged the generosity of the Ramsay family in lending works, saying: “Their gift of the Ramsay Archive has enriched our understanding of the artist’s life and work and informed the enlightening and richly-illustrated publication, ‘Hugh Ramsay’, accompanying the exhibition.”

“Hugh Ramsay,” at at the National Gallery of Australia, from November 30 until March 29. Entry is free.