BACKED by moving images from filmmaker Paul Bissett, the Australian Voice Collective burst onto the stage of the Ralph Wilson Theatre over the weekend with “Still, We Rise”.

This new music performance group of young people, aged 10 to 25, aims to break the mould of the typical children’s choir.

Trained by Bissett and fellow artistic director Rachel Campbell over several months, these were 14 young people with developing voices, miked up for maximum effect, singing both in unison and harmony. Temperate pop music was the order of the day, with a new song, “Seeds of change”, written for the production by Chloe Sinclair.

The production was themed around American poet and civil rights activist Maya Angelou’s sizzling poem “Still I Rise”, performed on-screen and used as testimony to the fears of coming generations, and the hope that “we can do better”.

Recurring motifs emerged, often indicated on the upstage screens with words like anger and inspiration. 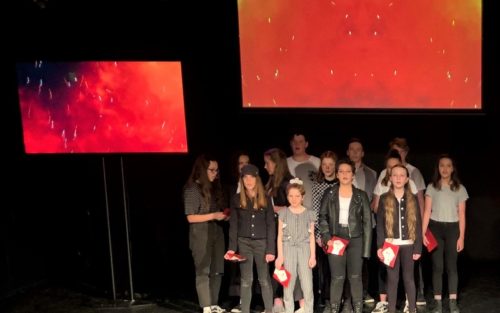 Bissett’s strong visuals at times dominated the singing, but also cleverly prevented the performance from getting too despondent. In any case, it needs to be remembered that in rock concerts such visuals are commonplace.

In the “anger” sequence, blazing images of fire backed a gentle rendition of Midnight Oil’s “Beds Are Burning”, while later, Paul Simon’s “The Sound of Silence” was matched to the idea that children should be seen and not heard, even as starry, starry skies appeared on the three upstage screens. 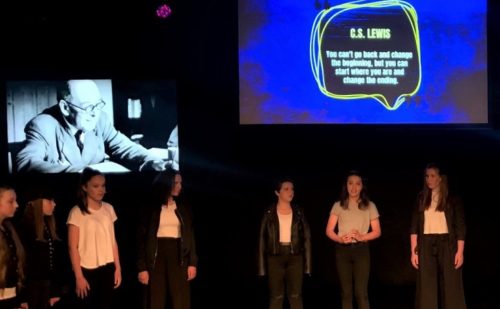 Most striking were the cut-in scenes of youthful protest around the world and in Canberra, where the camera zoomed on a raised fist posted outside Gorman Arts Centre, shown through rain-drenched barred windows and at the end on flyers in the hand of the singers.

The hour-long performance took the audience through the ups and downs of being a young person, especially the sense of voicelessness when faced with questions like climate change, family violence and racism.

With the endless permutations and combinations of youthful anxiety and optimism played over and over again, the message was too clear, too early. As well, this piece of theatre – as staged and choreographed, was more than a concert — and seemed to have at least four or five possible endings, which dragged on.

Nonetheless, with a little tightening, this accessible and professional-looking work would be ideal as a touring piece to events where inspiration is sought, and who doesn’t need a bit of that?