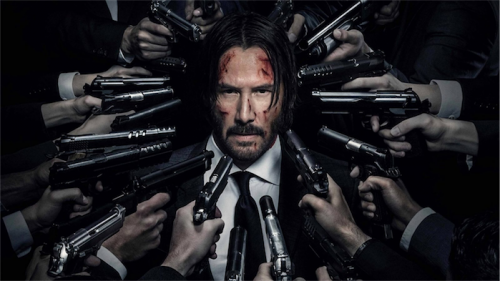 SUMMARISING one of the unhappy possibilities confronting every nation, Si vis pacem, para bellum (If you want peace, prepare for war) is an epigram first recorded by a Roman writer in the early Christian era.

Chad Stahelski comes from a prolific film career as a stuntman and fight director, as well as directing the three films about professional assassin John Wick to screenplays by Derek Kolstad (in the present case, assisted by three other writers).

It’s not unreasonable to suggest that Stahelski, Kolstad and actor Keanu Reeves (playing Wick) have a nice little earner as long as Reeves can stand the pace of a man whom the bad guys simply can’t kill.

“Wick 3” is a violent fantasy actioner that begins by declaring professional assassin Wick excommunicado from his government post. The trade union representing the criminal fraternity, called the High Table, posts a $15 million reward for whoever kills him.

So every bad guy on the planet wants to shoot John, stab him, throw him from a great height or any other unsurvivable misfortune. A major budget item was probably armourer Joel Tarantino, supplying the bad guys with those wonderful Hollywood firearms that blaze away for yonks without reloading.

Reeves, Halle Berry, Ian McShane and Laurence Fishburne play righteous dudes, Anjelica Huston is the Director organising things, Asia Kate Dillon is the Adjudicator hovering around to validate claimants for the bounty. None of those principal characters needs to work up a sweat from good acting. The most numerous cast members are the stunt guys and gals cavorting acrobatically around before dying.

In best Hollywood fashion, John Wick survives because none of his opponents shoots straight. That strongly hints a further sequel, more mindless fun than any improbable outer-space fantasy.