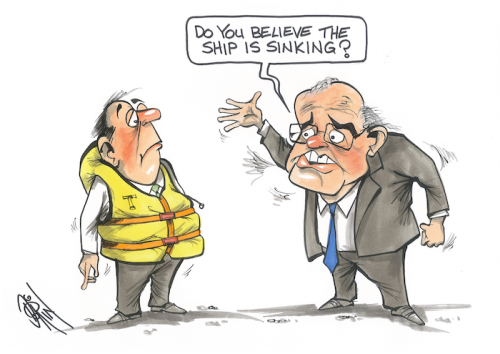 IT’S a truism that generals tend to fight the last war they won instead of the one that confronts them. But never have I seen it so brazenly displayed in the election battleground as the Morrison government fires the opening salvo against the Labor enemy.

Scott Morrison was the director of the NSW branch of the Liberal Party in 2001 when John Howard trounced Kim Beazley in the “Tampa” election. The moment Howard engaged the SAS to keep the refugees from landing, Beazley was toast. It was an ad-man’s victory. Morrison, who had been a promoter of NZ tourism and would transfer his promo skills to the Australian body in 2004, was up to his neck in it.

He really took the lesson to heart. When he became Immigration Minister, he militarised Operation Sovereign Borders with Gen Angus Campbell (now CDF) by his side; and as the Navy turned back the boats he rode the wave of applause from his party room all the way to The Lodge. So, what could be more natural than to remount the strategy in this latest contest for the Treasury benches?

Trouble is, these days the boats are few and far between. So he’s had to raise the temperature of the debate by re-opening Christmas Island in the wake of a vote in Parliament to treat the remaining refugees a little more humanely.

But by refighting the last war, he’s totally overlooked the real danger to our sovereign borders just over the horizon. Indeed, this man who fondled a lump of coal in the Parliament itself, is complicit in creating the conditions for an armada of boats that would dwarf the few hundred that carried the refugees from the Middle East wars to our shores. For that is the absolute certainty if the Morrison government continues to join with the other climate-change denialists and global temperatures rise 2C.

The war we’re fighting today goes to the heart of our future life on Earth. It’s no longer a vague possibility that might discomfort us in the decades ahead. As the bushfires penetrate ever closer to our provincial towns and cities, as the floods break the northern river banks, drown the stock and ravage the homes of our people, and as our great river courses in the south fade to a deadly green to millions of native fish, it is a real and present danger.

That’s just us. We’re the relatively lucky country because our continent is so vast – and our population so small – that we will always be able to adapt better than others whose islands and deltas will be inundated and others whose crowded hinterlands will no longer support their vast populations.

They will be on the march and on the sea. The very notion of sovereign borders will be drawn into question. It is a crisis that we should be preparing for right now – with diplomacy, defence and most important, with leadership in the struggle against climate change.

We know that Scomo (or is it “Promo”) will be cuddling coal as the waters of Lake Burley Griffin lap the Parliament and the bushfires roar down from the Brindabellas. But what of the Labor Party?

Are they up for the fight?