NO literary form is harder to write than a play; the dialogue must live, the structure must be tight and the playwright must stay out of the action to let the characters get one with it. It can take years.

For eight years The Street Theatre has been running a dramaturgical project called “First Seen”.

A way of creating original performance work and encouraging debate on issues and relationships central to Canberrans’ lives, it is co-ordinated by Shelly Higgs and sees each writer provided a weekly wage and given a week-long professional workshop followed by a public presentation of the work in progress.

Quite often the works “first seen” go on to be staged by The Street and notable successes have included Sandy France’s opera “From a Black Sky”, the song cycle “The Weight of Light” and director/playwright David Atfield’s play “Scandalous Boy”.

This year Atfield turns dramaturg. He’s been charged by The Street with selecting four plays for workshop, drawn from 14 script submissions.

“CityNews” catches up with him and writer Dylan Van Den Berg as they prepare for a “First Seen” week on Van Den Berg’s script, “Milk”.

Van Den Berg’s a drama graduate from the ANU, who has worked in hospitals as “Captain Starlight” for the Starlight Children’s Foundation and now has a job at the university in the in the reconciliation action plan area and is also a veteran of “First Seen”, with his play “Blue: a misery play” workshopped in 2017.

Atfield, who also had his play “Lovely Louise” worked on at the 1998 National Playwrights Conference and enjoyed a short development period with writer Jonathan Gavin on his 2018 play “Exclusion” is very comfortable in the role of play selector, especially under the relaxed rules at The Street.

“People can send almost any sort of script, so there are plays at several different levels of development… I’ve selected three and also a fourth play, which is virtually ready to go.”

To him, the “beauty” of “First Seen” is having professional actors, but he also likes the final Q&A – the whole deal is “quite a fabulous offer”.

The plays that he has selected, Atfield says, “are all very personal stories.

“You could feel the heart in them and that’s what made them come to the top. I felt like they needed to be performed,” he says.

Van Den Berg’s play, “Milk” is a case in point. Three generations converge in a conversation between an old woman from the 1840s who is dying, clutching a stone, a middle-aged woman from the 1970s curling her hair for a date and a young present-day man, grappling with his past.

The set-up derives from his own origins in an indigenous family that left Flinders Island area before World War II and integrated into Launceston and the “milk” of the title comes from the aunties who used to say: “With skin like milk, you’ll pass, you won’t have to worry about that,” a reference to “passing” for white on the Tasmanian mainland.

Growing up with just a few untrue family jokes about being related to Truganini, Van Den Berg was forced to come to grips with his Aboriginal heritage when he came to ANU and met a knowledgeable aunt working there who made him aware of his cultural ignorance.

“My play is set in a metaphysical world and I have to decide how to stage the three different levels,” he says. But he knows the 1970s character, free with her love, is full of rich, sarcastic humour, while the 1840s character is more serious. The present-day character is caught in between.

Atfield says: “The script has a very strong first act, but it’s hardly got a second… there will be a lot of emphasis on words first, but after that we might explore space and how the characters interact.”

Van Den Berg is about to become a father for the first time in August, so is recording everything his 95-year-old great, great grandmother tells him, to pass on to his daughter.

“It’s nice bringing my individual story into the western theatre tradition. In the ’70s people wanted to hide it, but I’m finding my own voice. I’m an actor and writer,” he says. 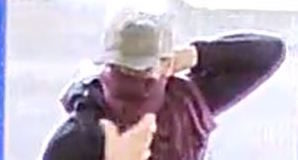