ROBERT MACKLIN remembers That Day in Canberra when the Deputy Prime Minister accused him of being a romantic!

IT was a busy day in the office of Deputy Prime Minister, John McEwen. Cabinet was sitting in the big room down the corridor of Old Parliament House and “Black Jack” would come out from time to time for a break or to get ammunition from his department for the argument raging inside. 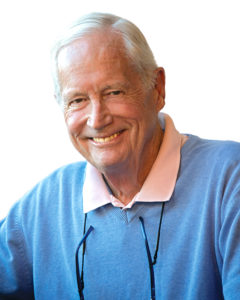 There were only six of us on his staff in those innocent days and, as press secretary, I was the only man on the team – a 26-year-old who just a few years previously had been a jackaroo in my native Queensland, then a shearing team roustabout in the far north-west. That was a world away now. Indeed, it might have been on the moon.

Well, almost. Like most others I had been following the progress of the American astronauts on their extraordinary journey and I think my youthful excitement must have rubbed off on the old boy. He gave us the nod to hire a television set for the day and we rigged it up in the office I shared with the departmental liaison officer, Mary Byrne (who later became the second Mrs – then Lady – McEwen). The reception was a bit fuzzy but it felt, well, historic.

As the module came in to land, word went in to the Cabinet and they broke up to share the moment. Mr McEwen came in carrying his papers and we sat and stood around waiting for something to happen.

He was an impatient character at such times and after about three minutes he said: “Well, Rob, when are they going to do something?”

Suddenly I felt responsible for the whole thing. “Shouldn’t be long now,” I said. But of course it was interminable. McEwen got fed up and went into his inner sanctum to work on his papers. “Let me know when someone makes an appearance,” he said.

I couldn’t believe it. Here was a man born in January 1900, three years before the Wright Brothers made that first flight on Kitty Hawk planes. He had lived through the entire age of flight from bi-planes to single wings, from combustion to jet engines, from fighters and bombers to supersonic airliners, and now with the imminent conquest of space itself, he couldn’t spare half an hour while Neil Armstrong and the boys prepared themselves for that first step upon another world!

However, when Armstrong finally appeared, Maureen O’Dea, the assistant private secretary knocked on his door and he came out to stand with us as the astronaut made those long, slow steps down the ladder and, “One small step for a man…”

“Well,” I said, “that was something… gives us a whole new perspective, one world to another.”

I went home and opened a bottle of red with my wife, Wendy. We sat outside for a while and looked at the night sky. “The infinity of space,” I said, “but I almost feel that I can touch it.”

Wendy went inside. Too damn cold. I stayed till I started sneezing… romantically, of course.

Helen Musa - August 14, 2020
0
In her latest column, arts editor HELEN MUSA goes on an adventure of Australian love, reimagined writing and lake dancing, to bring readers a list of things to do in Canberra over the next few days.