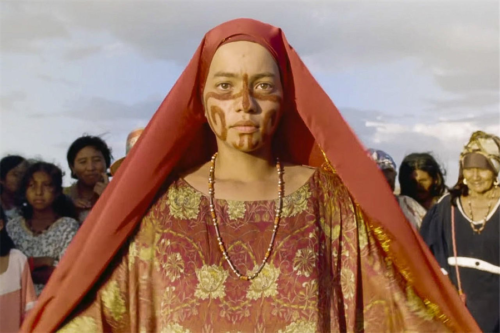 THIS beautiful, challenging and ultimately rewarding film, with nary a feather nor an ornithologist in sight, is about people adapting to 20th century practices after simple living according to centuries of cultural and social traditions.

Before the 1970s, the lives of the Wayuu people of Colombia began and ended in the desert of the Guajira peninsula – barren, flat, hot. The film follows a route determined by events that it never shows, in a country where a life for a large proportion of the people is now blighted by what the Wayuu have long produced with highly developed traditions.

Her mother Ursula (Carmina Martinez) has taught her important lessons about honour and duty and the importance of “the word”, spoken by a respected elder speaking with the proper words and respect.

When Ursula tells Rapayet (José Acosta) that she requires a substantial dowry for marriage with Zaida, Rapayet starts supplying “the weed” to the US. And that, history now tells us, often with the aid of Hollywood’s only product, leads to crime, violence, poverty and other bad things at both ends of the path.

The film shows quite disturbing passages that do more than describe the corruption of the Wayuu people and their cultural traditions. In translation to subtitles, the vocabulary of the dialogue, mostly in the regional native dialect, makes their loss of innocence all the more poignant.

Since opening in February, “Birds Of Passage” has won a slew of awards and nominations from peer groups and film festival audiences. Taking a tad over two hours to arrive at a conclusion demonstrating the dreadful consequences of the drug trade, it has earned much of its quite small world-wide earnings to date from outside the US. Which, by reading between its lines, says more than those few words.