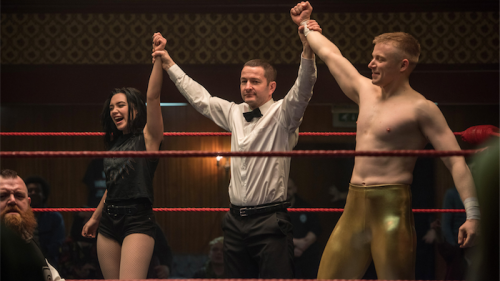 THE acronym WWE gets frequent mention in graphics appearing from time to time in writer/director Stephen Merchant’s entertaining UK/US co-production.

“W” could mean “World”. Indeed, it does. Or it could mean “Wrestling” or “Women”. For neophytes like you and me, the “E” is hard to work out. It stands for “Entertainment”.

WWE is not the classic Greco-Roman wrestling style. About the only things that its rules seem not to allow are biting and kicking to the genitals. It’s a blood sport that the ancient Romans would consider to be tame because it expects competitors still to be alive at the end of the performance. Note that word. Some might consider the bouts to be contests. They’re big on series TV. Men and women compete. I don’t say that results are rigged. But events in the ring are designed to please the audience no less than to win. To me, that says “Performance”.

“Fighting With My Family” purports to tell the real-life story of Saraya-Jade Bevis, daughter of Ricky (Nick Frost) and real-life Julia who fought under the name Sweet Saraya (Lena Headey) and younger sister of Zak (Jack Lowden).

The Knight family has raised itself a little above the base of the working class in Norwich. They’ve all been wrestlers. And they’re pretty good at it.

The film’s producer is Dwayne Johnson aka “The Rock” who, before becoming a Hollywood action star, was in fact a WWE drawcard. Legend has it that watching a UK TV documentary about the family moved him to think about making a feature film about Saraya’s career under her fighting name Paige that saw her become WWE Divas Champion in 2014/15.

The film ends after Paige’s first of those championships. Now in her 27th year, she has retired. Playing her, Florence Pugh delivers an awesome performance full of athleticism (possibly a stand-in appeared for her in some of the more brutal moments, but you’d find it difficult to say when that happened if indeed it did).

It’s unexpectedly good fun, interspersed with moments depicting what must have been excruciatingly painful to the players. Life was not meant to be easy.