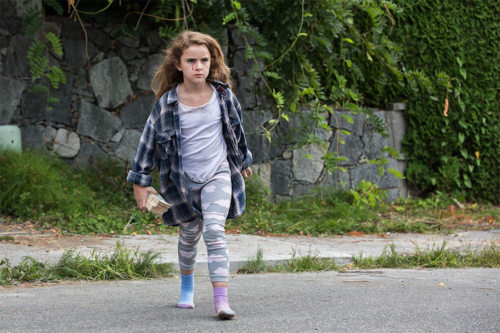 FOR their joint feature debut after what looks to have been undistinguished careers in short films and TV series, Canadians Zach Lipovski and Adam B Stein co-operated in writing and directing this sci-fi horror fantasy.

At age seven, Lexy Kolker played Chloe, living in a dilapidated house with Dad (Emile Hirsch) who on first meeting projects a strong sense of “methinks the father protecteth too much” (need a quotation to modify for any occasion? Ask Shakespeare). Dad persists in telling Chloe that her mom Mary (Amanda Crew) is dead (but we know she’s not). The doors are locked, the curtains are drawn, there are spaces in the house where Chloe is forbidden to go.

The Department of Homeland Security is trying to defeat an evil influence that’s causing victims to bleed from their eye sockets. In a blue ice-cream van, Mr Snowcone (Bruce Dern) tempts Chloe to evade Dad’s rules. And from then on, it’s an unbroken mixture of parental and official opposition to Chloe’s wishes to find what’s going on.

The formula is moderately clever. The film delivers low-budget conflicts that become increasingly complex as they confront Chloe. The violence, the mystery, the fantasy, combine to create an enigmatic outcome, par for the course in this genre. I came out concerned most for the long-term effect of Chloe’s very grown-up behaviour on Lexy Kolker, whose performance is mature beyond her years. And the film left me with a grudging admiration for Lipovski and Stein.