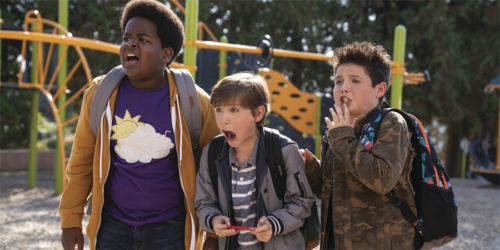 THIS is the first feature film for director Gene Stupnitski, who also co-wrote it in collaboration with Lee Eisenberg.

It’s being promoted as a comedy. Oh yeah?

It’s about primary school boys in middle America. Here in Australia it’s beyond the reach of primary school kids of either sex. And the classifiers got that MA classification right. It sets very bad examples of juvenile behaviour, parental control and social responsibility.

Max (Jacob Tremblay), Thor (Brady Noon) and Lucas (Keith L Williams) are chums. In their last year of primary school, they yearn to explore that unknown territory that lies beyond puberty, where girls are unfamiliar objects of desires as yet known only by repute.

Before Max’s dad leaves on an overnight business trip, he forbids Max to touch the drone. Lucas’ parents are cohabiting while awaiting their divorce. The one most to be pitied, living with no visible parental control, is Thor.

The three are desperate to attend a party where there will be girls and games involving kissing. Max doesn’t know how to kiss and is desperate to learn before the party. What sets him apart from every other little boy about to meet his hormones?

The film sets the trio on a journey through a world of drugs, thugs, sex toys, beer, violence, spin-the-bottle and generally unschooled behaviour. If the screenplay’s attention to the boys’ plight had been better-informed, “Good Boys” might have delivered its message more effectively. But it wasn’t and it didn’t.

Belinda Strahorn - August 13, 2020
2
Political reporter BELINDA STRAHORN rakes through the flotsam and jetsam of another week on the 2020 ACT election trail...