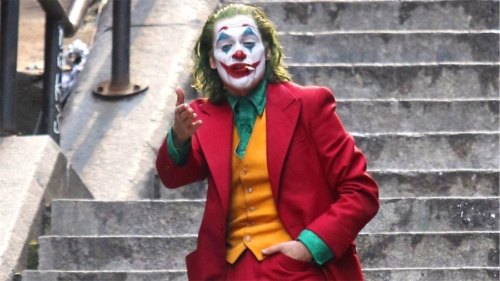 WHEN it comes to the 2020 Oscars as it surely must, if a cynic like me was a betting man, I’d put a modest wager on two nominations – Todd Phillips for writing and directing “Joker” and Joaquin Phoenix for playing Arthur Fleck (aka Joker) who becomes the nemesis of that other comic book character, the Caped Crusader (Bruce Wayne aka Batman).

The play’s the thing – whether it’s to catch the conscience of a regicide fratricide king now married to his former sister-in-law, or to show a man whose life has been blighted by not giving him what he considers to be his birthright.

Arthur has reached the end of his tether. To fill the void lying beyond any possibility of emotional control, he turns into a terrible sociopath who has concluded that laughing is the way to make others like him. So he adopts the full panoply of a clown in the modern tradition – white-face, wig, costume, pratfalls, jokes – and sets about getting his own back on society.

The film makes oblique statements about modern urban issues, from garbage awaiting collection to mocking the social structures on which the public depends for diversion and edification.

There are brief glimpses of the Wayne family whose power in Gotham City government is so pernicious that in future years its scion will become the city’s most dedicated crime fighter.

Robert de Niro plays the host of a TV talk show that Arthur disrupts in the most shocking way.

To tell the story of Arthur’s decline from a mild-mannered failure in a low-paid job into a killer untrammelled by laws or social conventions, director Phillips takes filmgoers on a slow (122 minutes) journey along a path often trodden in movies but seldom as intensely as the one that unrolls below the oversized shoes on Arthur’s feet.

Phoenix plays him with an intensity that some filmgoers might consider excessive. But there is no denying the power of his delivery of the character.

CityNews - January 20, 2020
0
THE inner-south was slammed by hail early this afternoon in a day of predicted "severe thunderstorms".