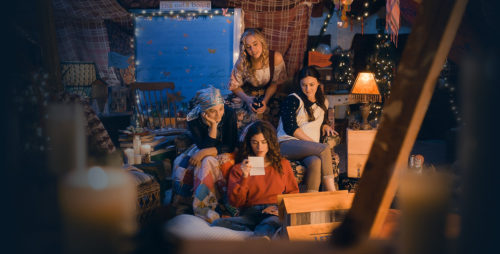 MY mother was the only woman in our six-person family. The many books in the house didn’t include Louisa May Alcott’s classic tale about a late-19th century family with four daughters. In later life, reading it seemed not to be necessary.

I watched this 112 minutes’ modernisation of the story with a sort of mental tabula rasa free of expectations and found it an agreeable experience.

The film begins by introducing the sisters. At 13, Jo (Sarah Davenport as an adult) is a pain in the butt, obsessed with her self-perception as a writer of books and plays. Beth (Allie Jennings as an adult) and Meg (Melanie Stone ditto) are loyal middle sisters. Amy (Elise Claire Jones as a child, Taylor Murphy as an adult) feels dreadfully left out because her sisters now wear brassieres. My affection for Amy lasted to the end of the film.

Father March is an army medico whose presence is relatively irrelevant. As Marmee, Lea Thompson is somewhat wan.

As far as I have been able to ascertain, the film sticks to Ms Alcott’s narrative structure. If you’ve read the book, you’ll know; if you haven’t, it doesn’t really matter. In her debut feature film, writer/director Clare Niederpruem flicks the action through the 16 years that follow our first meeting with the sisters on the way to a closing passage that made me feel sorry for the bloke who features in it. That structure works well enough.

Perhaps Jo is Ms Niederpruem writ large. She has written Jo’s character in a way I found annoying, as a freewheeling, free-thinking woman doing whatever and whoever she wished but in need of a reality check by a publisher rejecting her work. That way, Jo might have become a better person, or a disillusioned one. Instead, her writing mentor marries her. Roll closing credits.