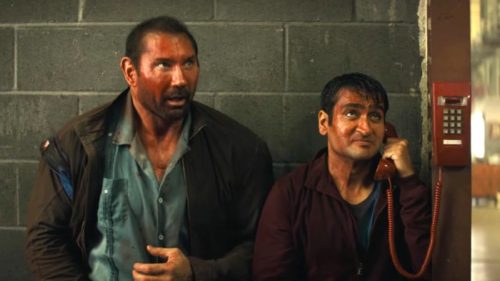 YOU might be forgiven for wondering who the heck is Dave Bautista who heads the cast of director Michael Dowse’s film.

Dave comes from a career in short films and professional wrestling TV series. He’s built like a brick. This year, his marketability seems to have taken off following the making of “Stuber”. Amazing!

Dave plays Vic, an aged Los Angeles police detective whom his divisional chief Angie (Mira Sorvino) wants to retire. His eyes are post-operatively shot. He can scarcely see whom he is shooting in the line of duty. He certainly isn’t fit to drive.

And that’s where Stu (Pakistani-born Kumail Nanjiani) comes in. Stu is a mild-mannered Uber driver trying to assemble enough money to marry the girl of his dreams.

In Tripper Clancy’s first feature screenplay, Vic takes over Stu’s life in the campaign to bring down criminal mastermind Tedjo (Iko Uwais) and uncover the LAPD person who’s doing him favours.  This gives Dowse an excuse to pack the film with violence, villainy, widespread destruction of property, a growing body count and dialogue liberally peppered with that word that the editor won’t let me put on his pages, even though you know what it is, don’t you, and so do your school-agers.

“Stuber” is a ho-hum movie in which Stu’s electric car is a recurring motif providing the film with a silent but important comic personality. The screenplay tries to convince us that it’s ultimately about mateship and Stu’s discovery of his hidden, wild-mannered, self.  Some might agree. But it’s very predictable.

At Dendy, Capitol 6, Hoyts and Limelight