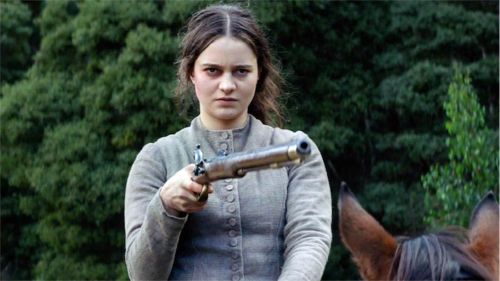 Until militia Lieut Hawkins (Sam Claflin) hands over the ticket of leave she has earned by completing the sentence for which she had been transported to the far end of British colonial expansion, she cannot leave Hobart town.

Hawkins has raped her regularly. Sgt Ruse (Damon Herriman) is a bully who despises Aborigines and wouldn’t say no to a go at Clare.

In the tavern, Aidan gets shot and the baby is dashed against the wall. Hawkins is offered a promotion at Launceston. He, Ruse, a small party of privates and an orphan boy set off to walk there through the wilderness. Clare, driven near to emotional annihilation, obsessed with the need for revenge, engages young indigenous man Billy (Baykali Ganambarr) to guide her in pursuit.

Writer/director Jennifer Kent’s second (after the multi-award-winning “The Babadook”) feature takes 136 minutes to pull out all the stops involved in delivering the complete sweep of that narrative, time and place. It’s not a “nice” movie in the sense of sweetness and light but as imaginative of what might have been possible, it ticks just about every possible dramatic box.

Does the filmgoer need a strong stomach to cope with “The Nightingale”? It helps. But persevering delivers rewards. I came away from it pondering recent remarks by leading indigenous spokespersons about the treatment of Aboriginal Australians in the first centuries of European colonisation; Kent’s exploration of that issue offers a strong contemporary political relevance.

Much of “The Nightingale” is fundamentally excellent. The acting is admirable. Aisling Franciosi does her own stunts. Baykali Ganambarr, who already has received an international award for his debut role, has a future up there among the indigenous stars. The exterior locations are breathtaking. In all, the package offers so much that is good that I had no difficulty in accepting the technical shortcomings in its staging. Shakespeare said it all – “the play’s the thing…”, even so out of context as in this case.

CityNews - February 19, 2020
0
Certis Security Australia, the Canberra Airport's security contractor, has hit back at the United Workers Union saying its claims are unfounded after it accused Certis of docking the pay of employees who couldn't get to work during the bushfires.