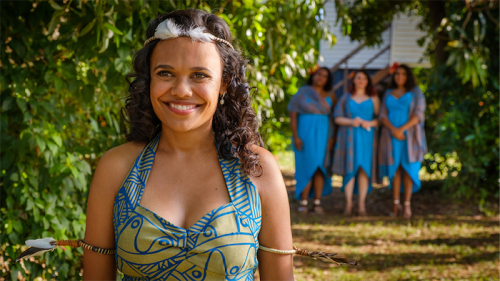 IT would be interesting to know what the indigenous ladies playing crowd scenes were thinking during filming the wedding sequences at the end of this little romantic comedy.

I expect that indigenous director Wayne Blair was respectful of tradition when specifying costumes and face painting. And that Miranda Tapsell made co-writer Joshua Tyler aware of indigenous customs during the writing of the screenplay. Miranda Tapsell is also the star and one of the film’s producers.

Lawyers Ned (Gwilym Lee) and Lauren (Tapsell) live together in Adelaide. He has just resigned from working as a prosecutor but hasn’t yet told her. She has just been made an associate in the law office led by Hampton (Kerry Fox) who has given her 10 days to get married or lose the job. Big problem, that, because Lauren says she must have her mother Daffy at the wedding. And her father Trevor (Huw Higginson) is going through emotional agony because Daffy (Ursula Yovich) has split from wedded bliss and he has no idea where she is. So Lauren and Ned fly to Darwin to find her.

Ned is, let’s face it, not all that sharp about doing what men are expected to do. Petrol in the tank of the rented diesel 4wd is not a good beginning. Lauren pops out for just an afternoon drink with the girls and doesn’t get home until well into the night.

What we have here is a noisy comedy of errors that visits a small number of territory scenic spots before coming to a halt on Bathurst Island. A good excuse for the wedding party that Hampton has flown up to organise. Trevor and Daffy are reunited. Roll end credits.

It’s pleasant enough. Miranda Tapsell and Kerry Fox have good acting chops. The screenplay might cause people to wonder how or why characters, equipment and actions get where they are seen.

The NT government gave financial assistance to “Top End Wedding” in expectations of it encouraging tourism. The return on that investment is a pudding awaiting judgement in the eating.