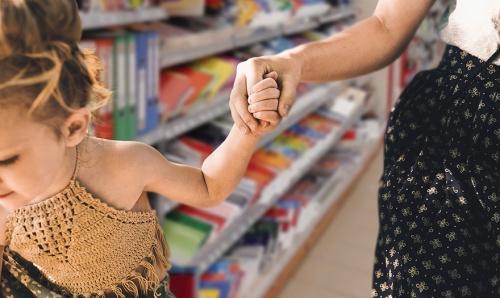 IT was a busy Saturday afternoon at the shopping centre, my family and I were running errands in between the Peppa Pig and Bob the Builder rides that the kids insisted on as we moved from shop to shop.

After a quick haircut for the children, we braved a department store for our last stop to buy a birthday present for a little friend.

Readers might recall my previous “boss baby” column, which explained outlined the determination of my two-year-old daughter and her refusal to sit in a pram anymore…

It doesn’t take a crystal ball to work out what happened next.

One moment the boss baby was throwing a ball down the aisle in the toy department, the next she was gone.

I was deciding on a Lego set for the birthday friend, as my husband ran to fetch the ball that the boss baby had thrown into the neighbouring menswear section.

He says that he told me to “keep an eye on her” as he walked past, but I swear I didn’t hear him.

As he returned he asked: “Where is she?”

It was bizarrely weird that she wasn’t in sight; each of us were sure that the other had her. It felt very odd for her to not be nearby as I called her name and we looked up and down each of the toy section’s aisles.

When I checked back with my husband and neither of us had found her, that’s when the panic rose.

I recalled reading an article about losing a child in a public place and it had said to shout at the top of your voice that you’ve lost your child, calling their name and describing what they look like. That’s what I started to do, after grabbing hold of my son’s hand tightly and not letting him go.

I felt like I was making a lot of noise, but no other shopper asked if they could help.

I walked up to the front of the shop and grabbed a staff member, explaining what was wrong. She went to get the manager (I think) as I ran back to the toy section. Once I saw that my husband still hadn’t found her, that’s when things got very frightening.

Every horrible thought started running through my head:

“Did she leave the store to go play on the ride outside?”

“Can a two-year-old just leave the store unnoticed?”

“When do we widen the search?”

“When do the police get involved?”

“Where the hell is she?”

And the worst thoughts of all were the sickening ones of what “someone” might have done to her, and taken her from us as we were stupidly distracted on a perfectly normal day.

I ran, fast, back to the front of the store, my voice cracking with fear and desperation as I said to two staff members:

“You all need to help me, we can’t find her. I need everyone to help me find her NOW!”

I then remembered that she’d enjoyed the book section last time, so I ran, still holding my son’s hand, to the books as the announcement about a little lost girl in a pink dress was made over the loudspeaker.

She wasn’t there, but a staff member caught up to me and said to go to the front of the store.

I ran as fast as I could, tears in my eyes.

One woman kindly told me to “keep calm” as I passed her.

And there was my boss baby, holding the hand of a staff member, happy and found.

My hell was over but it took a long time to recover from the stress.

She was found in the towel section, happily walking around sporting her new haircut and striped pink dress.

She said: “I’m so sorry about that, mummy” as I held her close.

I then looked down at my son, who I had been running alongside all that time but hadn’t paid any attention to. He had tears in his eyes. At five, he understood what was going on and could see my pain and fear. Lots of extra hugs and reassurance later, we headed home.

Perhaps this happens every day at every major shopping centre. Perhaps you, too, have lost your kid and felt the bile rise to your throat as the tiny person who is always close by, suddenly isn’t.

Thankfully, my story ends well but we are chastened by this total nightmare.

0
"Miss Fisher and the Crypt of Tears" (M) * and a half DON'T get me wrong about that star rating. The big-screen successor to TV’s...

At Allan Hawke’s book launch of ‘Calamity and Conquest’