A POIGNANT reworking of Max Dupain’s 1937 photograph, “Sunbaker”, by Canberra Institute of Technology student Eunie Kim, has won her the United Nations Internship to Timor Leste.

UN national information officer Julia Dean made the announcement at the High Court of Australia on Wednesday (November 27).

The Sun Studios Award for the highest overall achievement in the Diploma of Photography and Photo Imaging went to Terry Cunningham, who generously snapped Ms Kim and her winning work for “CityNews”.

Kim’s winning work, “Sunbaker”, shows the archetypal Aussie sunbather, who, in reality is Kim’s husband James Bolto, lying not on smooth, and white sand but on the parched earth of Australia in the grip of drought.

Ms Dean praised the photographer for her “intellectual rigour”.

The United Nations Information Centre, together with CIT run an annual thematic photography competition where the winner is rewarded with an internship with a United Nations Mission in the Paciﬁc region. Previous winners have been posted to Banda Aceh, Solomon Islands, Fiji and also Timor Leste.

The announcement came as the high point of the opening for the photography exhibition by students graduating from the Certiﬁcate IV and Diploma of Photography and Photo Imaging, attended by an estimated 350 guests. 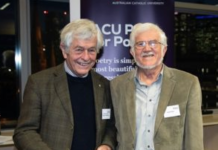