I WASN’T sure if I was in a science lab or a dessert establishment. In the end, it was a bit of both.

I had settled in at Frugii in Braddon to road test their creative new take on the classic hot chocolate ($15).

The ingredients arrive on a tray. A white bag of freeze-dried chocolate ganache, a flask of hot water and milk, two marshmallows and crystallised chocolate. Then you play scientist, enjoying the theatre of creating your own hot chocolate, just how you like it.

This new “dessert” is one of many the Marshall family behind Frugii Dessert Laboratory have been creating since opening in 2015. The lab is run by John (affectionately called “Mr Frugii”), his wife Ed and son Leon.

The biggest challenge is choosing. Hand-made ice cream, sorbet or gelato? Chocolates? Cakes? Tarts? A bit of everything (dare you)?

John’s story is fascinating. For years he was an IT guru, one of the best in his field. After work he and Ed would make ice cream, sometimes selling at markets and pop ups. They couldn’t keep up with demand so John kissed the technology goodbye and embraced the wonderful world of desserts.

How John creates his ice cream is another fascinating story, including how he came to create some flavours not normally associated with ice cream – worshipped by his “savoury” clients.

His latest (might be in the lab now) is roasted cauliflower and dukkah. On my visit I indulged in the freeze-dried carrot and mandarin. It may sound strange but, trust me, it was divine.

Tarts and cakes are also made from scratch. The rhubarb and blackberry tart ($5) looks decadent but isn’t overly sweet – rhubarb compote, blackberry cremeux and 64 per cent chocolate sable pastry.

The Marshalls make everything in their offsite commercial kitchen, to the highest of standards. John has always loved cooking and been fascinated with the technology behind food, including flavour pairing. He has found his niche in the marketplace.

Even though Frugii is tucked inside the Ori Building, there are regular lineups out the door, including on the coldest winter days. I wondered if freezing temps would cause a big dip in sales. Apparently not. 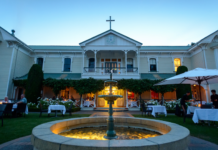