“Agree with her or not – it is clear that Vicki Dunne has made a significant contribution to the ACT community before and during her five terms as an MLA,” writes political columnist MICHAEL MOORE.

AS much as I have regularly disagreed with her, I cannot help but admire Vicki Dunne. Her announcement that she will not contest the next election means there will be a gap left in the conservative side of politics.

Vicki has the capacity to vigorously disagree at the same time as listening to the alternatives and being respectful of those opposing her view. This is a quality that should be fundamental to democratic legislatures. In this respect, newer MLAs would do well to take a page from her book.

I first came across Vicki when she was vigorously advocating for the adoption of the Hare-Clark system of voting. With the support of then-MLA Gary Humphries and her husband Lyle, she injected energy, commitment and enthusiasm into a campaign. That campaign delivered one of the most advanced electoral systems in the world accurately ascertaining voter intention.

Before her election in 2001, as I departed the Legislative Assembly, Vicki had been a senior adviser to my ministerial colleagues and later chief minister, Gary Humphries. In this capacity she was both a great supporter when we were in agreement and an effective opponent when our paths diverged.

Her reflections on the polarisation of the Legislative Assembly and reluctance to seek negotiated outcomes after her long-term involvement are telling.

During that time, it was also much more common for private members, whether on the crossbench or in the opposition, to successfully present legislation. The ability to move amendments and offer sensible debate around legislation was also facilitated by a diverse crossbench.

Having won a seat with just 55 votes to spare in the 2001 election, Dunne set about pushing her conservative policies. However, it was not just within the Parliamentary Liberal Party. Vicki had been working hard to bring more and more like-minded people within the Liberal Party. It was this sort of commitment that should provide a lesson to anyone who has strong beliefs in their own agenda.

Following the 2012 election, Mrs Dunne gained the support of the single crossbench member and previous Speaker, Greens MLA Shane Rattenbury, to be elected as Speaker. This was despite being a member of the Liberal Opposition. Her ability to deal fairly with MLAs from across the political spectrum was her hallmark of an effective parliamentary speaker.

Vicki Dunne’s belief in the importance of democratic systems did not dull after the days of the Hare-Clark campaign. Through her role as Speaker she also became much more heavily engaged internationally through the Commonwealth Parliamentary Association. She was Australia’s representative on that Association during her time as Speaker and was its treasurer from 2016 to 2019.

It will not be surprising to my readers that I have very different views on some critical social issues with the conservative views of Vicki Dunne. For example, I strongly disagree with her views on abortion as from my perspective, this is simply a matter of choice for the woman.

We also differ on the regulation of prostitution. I was responsible for the current laws in the ACT that regulate prostitution as a legal financial engagement between consenting adults. Mrs Dunne sought to have the Swedish model, which is based on the purchase of sexual favours as a form of coercion, making the male culpable. On other issues such as drug laws we also hold divergent opinions.

However, parliaments are places where people should be free to express differences of opinion. This is so much better than having to protest on the streets – or worse still – to go to war to settle disputes.

Whether you agree with her or not – it is clear that Vicki Dunne has made a significant contribution to the ACT community before and during her five terms as an MLA. 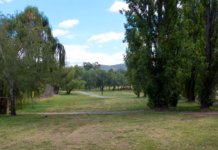 Wendy Johnson - August 11, 2020
0
“The staff are attentive and want you to be comfortable. There’s nothing they wouldn’t do to make your visit a happy one,” says dining reviewer WENDY JOHNSON after a visit to Magoo's at Kingston Foreshore.