THE Canberra Short Film Festival continues apace until the weekend and the 2019 results are out, with awards made in local, national and international categories from 380 entries.

“CityNews” art critic Johnny Milner, wearing another hat, took out the award for best director (Canberra), for his scary moody historical drama, “The Chosen Vessel”, filmed on a property near Braidwood.

Persian short films will be screened at Dendy at 7pm tonight (Wednesday, September 18) , then there’ll be an all-ages screening session at the Margaret Hendry school from 6pm on Thursday and a short flicks night from 6pm on Friday night, also at Margaret Hendry School, 100 Sutherland Crescent in Taylor.

The “Best of the Fest” screening has been postponed, date to be advised.

Best Director went to JOHNNY MILNER for “The Chosen Vessel”.

Best Cinematography went to WILL JORDT for “#fail”.

Best Editing went to MICHAEL HANSON for “You Are Enough”.

Highly Commended in Cinematography went to ELLIOT CERAMIDAS for “Dagger One”.

Best Screenplay went to LAUREN BAILEY and NICK CAIN for “Before I Go”.

Best Score went to ABBIE POBJOY for “Backing up Biliti”.

Best Actor went to NICK CAIN for “Before I Go”.

Best Editing went to DANIEL DAVID STEWART and JESSICA ROSE for “Blow Out”.

Highly Commended went to TESSA HILL for “This is a Teenage Love Letter”.

Runner Up went to NEVANKA McKEON for “Jade Runner”.

Runner Up went to VICTORIA THOMPSON for “Swallows”.

Highly Commended went to ANTONIO COELLO for “The Creation of the World”.

STF/Dendy Award went to NIC VEVERS for “The Green Light”.

STF/Dendy Student Award went to JAMES ANDERSON for “The Underdog”.

Highly Commended went to ÖMER COLAK for “Plus One”.

Highly Commended went to DANIEL SANGUINETI for “The Key”.

Highly Commended went to STEVEN JERRAM for “Moon Above the Raging Sea”.

Highly Commended went to STEFFIE YEE for “The Lost Sound”. 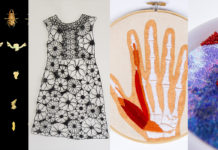 Danielle Nohra - January 22, 2020
0
Peter Graves, ACT chapter chair if the Walter Burley Griffin Society fears we are at risk of forgetting where Canberra came from and who designed it, reports DANIELLE NOHRA.