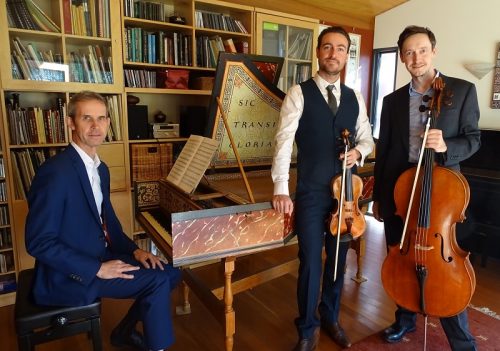 MAKING their Canberra debut, the Phoenix Collective trio said they would present “an eclectic program exploring the realms of tone colour, experimentation and virtuosity”.

And they did, including some interesting instruments.

Then there was Christian Lillicrap’s beautiful replica 1720 French double manual harpsichord, made by Australian maker Carey Beebe, who was in the audience, and brought it from the Central Coast Conservatorium in Gosford.

And Christopher Bennett had a lovely, resonant cello.

It was fascinating to hear the differences in the violins. The 1750 sounded mellow, the 1850 strident and the 2009 bright and clear.

Between them, the three artists introduced all the works, giving interesting and engaging backgrounds. Of note was the inclusion of some lesser known composers, like the 17th century Venetian, Dario Castello, whose piece “Sonata Prima a Soprano Solo” danced along quite nicely.

Another was the 17th century Austrian, Johann Schmelzer. His Sonata No 4 in D Major, starts slow and stately, then alternates lento/andante throughout. The violin played attractive, flowing passages over a very repetitive continuo.

The “cross-over” violin was used for Heinrich Biber’s Sonata XI “Resurrection”, from the “Rosary Sonatas”, completed around 1676, but not published until 1905! It starts strangely with a series of dance-like introductions but it never quite makes it to the main dance melody with dancers standing stranded on the dance floor. It eventually resolved into a slow gigue dance style.

There was even an Irish air from Celtic composer Turlough O’Carolan, in which Russell played some lovely, uncomplicated improvisations of O’Carolan’s beautiful, mournful melody, “Si Beag Si Mor” (roughly, “Fairies of the two little mountains”).

More familiarity came in the second half, with works by Vivaldi, JS Bach, and an intriguing piece by 17th century Bolognese composer, Tomaso Antonio Vitali.

Surrounded in mystery, his Chaconne in G-minor sounds no more Baroque than would a 21st century rock tune. It’s stylings, key changes, expression and drama are all from the Romantic period in the 19th century. No wonder there’s conjecture over whether Vitali had anything to do with its composition!

The instruments and program were interesting, but the Phoenix Collective’s playing brought them to life. They were thoroughly attuned to each other, with constant eye contact ensuring precise timing and shared support. In true Baroque style, there was very little vibrato (except in the Vitali), which not only resulted in clean and clear notes, but it also tested instrument tunings and saw players hitting the right pitch. They passed with flying colours.

The Phoenix Collective will be back in Canberra in September (Russell looks at moving here). Their first Canberra audience thought they were good, calling on an encore, yielding a charming arrangement of the closing movement of Vivaldi’s “Autumn” from “The Four Seasons”.

Belinda Strahorn - February 23, 2021
0
CANBERRA’S longest-existing victim support service that “runs on the smell of an oily rag” fears without any government funding it may close its doors.