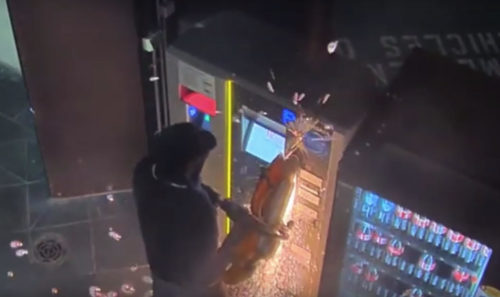 FOOTAGE has been released after three people attempted to break into parking payment machines at Westfield Belconnen, using petrol-powered grinders earlier this month.

The CCTV footage shows a maroon Mazda hatchback drive into the shopping mall car park from Lathlain Street at about 2.40am, on Friday, August 2.

Three people, two of a slim build and one of a solid build, all dressed in black, then used petrol-powered grinders and a crow bar in an attempt to access the cash box on two parking payment machines on level two of the centre.

Police believe the offenders were aware that security called the police, which led them to flee the scene via the Lathlain Street exit at about 2.45am.

“The cash boxes on these machines are emptied regularly, and many people pay for their parking using their card, so there usually isn’t a large amount of cash in the machines,” he says.

“These offenders had obviously planned this activity in advance, but police responded swiftly to the call from shopping centre security, and disturbed them before they could do any more damage.”

Police are urging anyone who may have any information that could assist police to contact Crime Stoppers on 1800 333000, or via the Crime Stoppers ACT website.