I FIRST contemplated writing a book about the Australian War Memorial towards the end of my more than 16 years as its director and had produced a first draft when my work had to stop in late 2011.

My wife became seriously ill and I took carers’ leave. I was never to return to the memorial and it was not until 2015 that I felt inclined to resume work on the book.

In writing it I have, essentially, gone to 1917, the year of many important decisions relating to a future Australian War Memorial. The then-government agreed to Charles Bean’s recommendation (supported by several others who shared his vision) that there be a special institution established that would commemorate the service and sacrifice of Australians in what was then called the “Great War”. It was intended to give those at home an insight into the hitherto unimaginable circumstances that fellow Australians were exposed to and had operated under.

The Australian War Records Section was also set up in London that year under John Treloar (later to be the longest-serving director) and schemes for war artists and photographers began. In late 1917, Gen Birdwood issued a memorandum to all members of the Australian Imperial Force that they should start collecting relics to make the proposed national museum “the finest of its kind”.

The extensive and diverse national collection and its conservation exists to support “commemoration by understanding” and not the purpose of being a military museum, which is quite a different thing.

Not unexpectedly, relationships with architects and builders are covered, particularly for Anzac Hall. This was a Centenary of Federation (2001) project opened by Prime Minister John Howard in the presence of Great War survivor, Ted Smout.

The hall went on to gain architectural accolades and won the Sir Zelman Cowen award for the best major public building. A Sydney paper described it as “arresting, seductive and unforgettable” and another as “an architectural triumph which complements the main building’s heritage status”.

I’m not going to comment on the present director’s plans to demolish Anzac Hall except to observe that his recent delayed attempt to justify it asserts, amongst other things, that it is “no longer fit for purpose”. 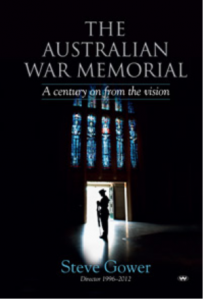 That is nonsense (in the context of the many possible other options) as is the claim that it’s the content that is special, not the building.

On that basis even the heritage main building might be demolished! Community outrage cannot be dismissed so airily; the ongoing controversy is both disturbing and damaging. Perhaps it is time for an independent review.

My first association with the memorial came soon after my arrival at Duntroon in 1958, when I attended the Dawn Service. In those days attendees could be fitted within the commemorative area around the Pool of Reflection and the cloisters upstairs.

In 1960, I was a proud member of the tri-service guard of honour. There was no shortage of World War I veterans then; indeed, there were Boer War men in the march past. As I stood to attention on parade pondering the architecture of the new, heritage-listed main building, little did I think I would be up on the dais 35 years later as the memorial’s director.

Charles Bean was probably up there as a member of the memorial’s board (now council). Since then I have seen and spoken with most of the subsequent chairpersons and directors.

I haven’t covered the earlier days of the memorial in the same detail as former deputy director Dr Michael McKernan did in his council-sponsored book in 1991, “Here is their Spirit”. Its publication coincided with the 50th anniversary of the AWM’s opening.

But I did think it was necessary to cover the memorial’s origins and early days to give context to all the latest developments such as the interment of the Unknown Soldier in the Hall of Memory.

I’ve endeavoured to make the book a comprehensive and engaging account of the first 100 years of the memorial, with more than 100 photographs.

For the memorial, there have been challenges along the way, inevitable controversies and periods of financial starvation. But people have persevered and soldiered on, and the result is a unique Australian commemorative institution.

“The Australian War Memorial – A century on from the vision”, Wakefield Press, $60. Available from AWM bookshop.