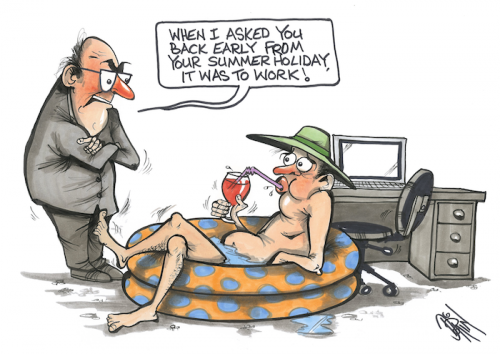 There will also be other musicians playing on the day such as Jess & Matt and locals TuchaSoul.

But for families looking to entertain children, Patrick White Lawns, near Old Parliament House, will have plenty of activities including cricket, a giant slide, live fairy tales, face painting and jumping castles.
Visitors can bring a picnic or buy from local food trucks before the 9pm Australia Day fireworks.

THE Museum of Australian Democracy will run a “Ghost Hunters Tour” on Thursdays and Saturdays until January 26. It’s a torchlight tour illuminated with stories of death, mysterious occurrences and dastardly deeds at Old Parliament House, 18 King George Terrace, Parkes, 8.30pm-9.15pm. Costs apply and bookings to moadoph.gov.au

THE Bungendore Show is showcasing and celebrating local talent, animals, produce, businesses and services in its 140th year. At The Bungendore Showgrounds, 71 Matthews Lane, NSW, January 27. Information at bungendoreshow.com.au

FROM Aboriginal times through to the establishment of the village of Hall in 1881, the exhibition, “A Tale of Two Villages” tells the story of the Hall-Ginninderra district. At Hall School Museum and Heritage Centre, Victoria Street, Hall, until June 13. Free. Information at museum.hall.act.au

“AFTER the war” explores the personal stories of hope, loss and love of ordinary Australians whose lives have been altered by war. At the Australian War Memorial, Treloar Crescent, Campbell, 10am-5pm, until July 11. Free. Information at awm.gov.au

ONE of the most diverse displays of reptiles in Australia, “Snakes Alive!” will be at the Australian National Botanic Gardens from January 14-20. At Clunies Ross Street, Acton, 11am, 1pm and 2pm. Information at anbg.gov.au

CANBERRA Theatre is bringing ballet’s most playful and live comedy to children aged three and up. “Coppélia” is full of magic tricks, life-size toys and enchanting costumes. At London Circuit, Civic, January 17-19. Information at canberratheatrecentre.com.au

THE National Film and Sound Archive will screen “Paper Planes”, which will be followed by plane-folding lessons with the “paper pilots” from the film. At McCoy Circuit, Acton, 1pm-4.30pm, January 26. Costs $10 with bookings to nfsa.gov.au

THE Illawarra Hawks team is promising a thrilling game of basketball when it comes to Canberra to take on the Cairns Taipans on Australia Day at AIS Arena, Leverrier Street, Bruce, 2pm-5pm, January 26. Information at hawks.com.au