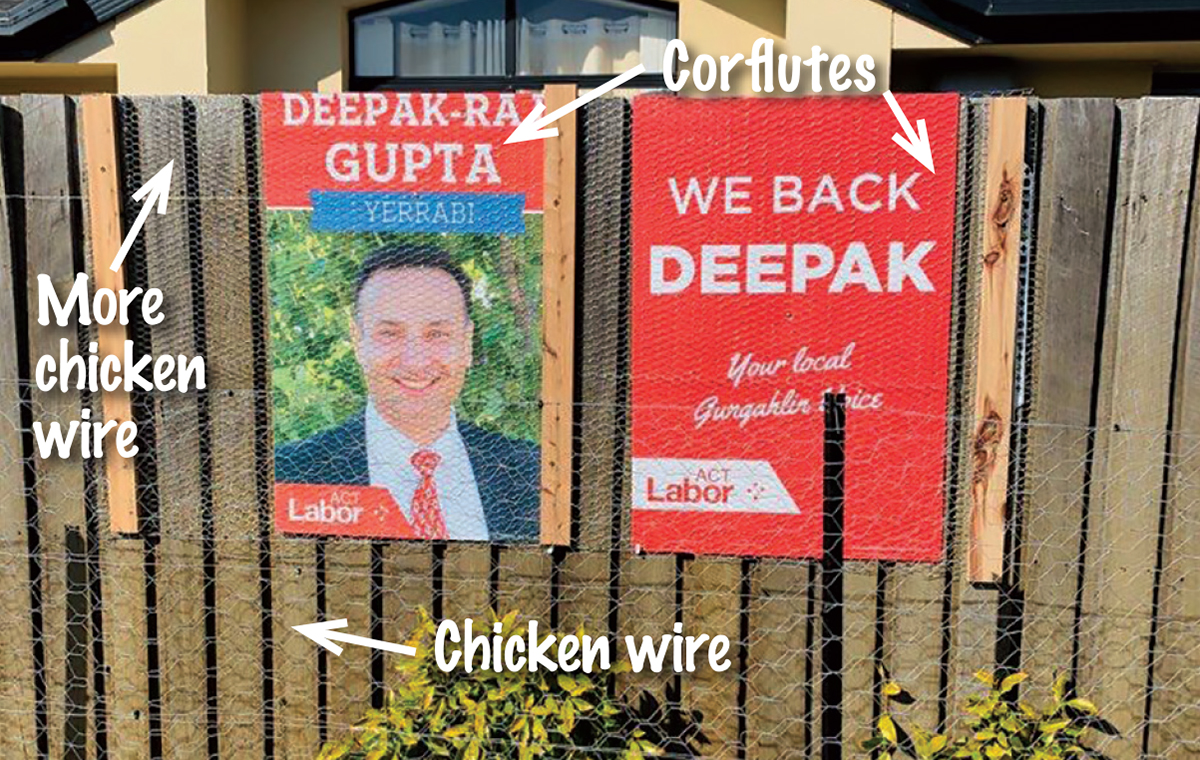 The candidate's guide to securing corflutes.

It's a bit sad that our covid-affected election has come down to thousands of roadside signs to help candidates with the challenge of recognition. It's a corflute-inspired "Seven Days" with IAN MEIKLE.

CORFLUTES. I came across a couple of people recently, one a reader, the other a radio listener, who'd never heard the expression. Hadn't a clue what I was talking about.

For clarity, I have looked it up and can formally report that corflute is the industry name given to corrugated polypropylene, a fluted plastic that is lightweight yet rigid.

The vote-for-me signs on sticks that are made from it punctuate the highways and byways around Canberra typically first appearing about six weeks from an election.

And, as day follows night, the moment the election corflutes began appearing, the ACT Greens began moaning again for a ban on roadside electoral signs.

Given covid restrains a lot of traditional campaigning, thousands of corflutes are festooning our major thoroughfares. And there is no legal limit on the number a candidate can plant.

“It’s well past time to get rid of these annoying electoral signs – they’re a huge turn off for the community and are a huge waste of plastic,” bemoaned killjoy Greens Murrumbidgee candidate Emma Davidson.

“Once the election is over, we can only assume that most of these end up going straight into landfill. What an utter waste."

However, the Greens are not alone: the ACT Electoral Commission's report on the 2016 election noted that social media had "indicated a relatively widespread degree of dissatisfaction with the proliferation of campaign signs (principally the signs on stakes known as corflutes) across Canberra's main roads and suburban streets" – but stopped short of recommending they be banned.

Meanwhile, my colleague and "CityNews" political reporter Belinda Strahorn in a piece for citynews.com.au reported it was "corflute carnage" across Canberra with one Labor candidate using chicken wire to stop thieves knocking off his signs.

Labor member for Yerrabi Deepak-Raj Gupta has had corflutes stolen from the fences of his friends’ properties in Gungahlin. They're now bolted down with chicken wire (the signs, not his friends), but he fears the thieves will be back.

In an aside, Belinda was told by Liberals' campaign director Josh Manuatu that it is his theory that, given the competitive nature of the Hare Clark voting process, corflutes are more likely to be knocked off by members of your own ticket than someone from another party. It's getting ugly out there!

And there have been arrests… of corflutes, with City Services' rangers taking 37 corrugated polypropylene signs along the light-rail route on Flemington Road into custody.

And assaults... with two Canberra Liberals' volunteers putting up election corflutes in Evatt in the early hours of a weekday morning being held up and robbed at gunpoint.

The volunteers were erecting roadside signs for Ginninderra candidate Kacey Lam at the intersection of Owen Dixon Drive and Heydon Crescent.

During the period, the business of government keeps going, but ministers have to keep their hands in their pockets and not bind an incoming government to anything.

After news of the approval, Liberal leader Alistair Coe said the decision demonstrates a “blatant disregard” for the future of the West Basin. The Liberals have previously promised to leave the area free of high-rise development.

And government gadfly and former chief minister Jon Stanhope, who after four months of freedom-of-information rebuffs, got a draft thumbs-up from the ACT Ombudsman to finally see what the secret West Basin land deal was all about.

Stanhope had argued that the ACT government has not been upfront with its dealings in relation to the Curtin Horse Paddocks and West Basin.

“I’m not a conspiracy theorist but I believe it’s a remarkable coincidence that in the week that the Ombudsman advises myself and the ACT government that documents that the government has been desperately trying to keep secret, should not be kept secret, the government releases information about a contract that it signed, in April, for works in relation to West Basin,” he said.

HERE'S an hilarious piece of pre-election hokum with Transport Minister Chris Steel haplessly announcing that a re-elected Labor government would, in an "ambitious transition", have an electric bus fleet in place by... 2037! Imagine this: Chief Minister Chris Steel marked his 21 years in the Assembly and Labor's 36 years in government by declaring the "ambitious transition" from 2020 to electric buses in Canberra was now complete.