“The current emperor of the Communist Dynasty, Xi Jinping, has quietly visited all Australian states and territories. He knows the country well,” writes “The Gadfly” columnist ROBERT MACKLIN.

MOST of us, I’m guessing, are bewildered by the really angry attitude of the Chinese toward the Morrison Government. And if our perception is confined to the 24-hour news cycle this is perfectly understandable.

In this light, it began with Morrison’s call for an investigation into the genesis of the coronavirus in Wuhan, and the following tit-for-tat powered the descent of relations until suddenly our entire trade with China is under threat. And it’s basically the Chinese government’s fault because after all, they’re Communists.

However, there is a larger context, part historical, part contemporary. The historical touches upon the appalling misreading by Cabinet Minister Alan Tudge who declared: “We have been welcoming Chinese migrants for more than 200 years”.

Sure, it began about 200 years ago when John Macarthur, the so-called “father” of the Australian wool industry, had at least three “indentured” Chinese labourers on his property in the 1820s.

Then, as the British parliament outlawed the slave trade in 1833, his fellow graziers realised that free convict labour was next in line and followed his example.

By 1848, I discovered in the research for my book “Dragon and Kangaroo” (Hachette, 2017) they had imported indentured “coolies” because of their “untiring industry, frugality and perseverance”, which were “the inherited instincts of their race” (“Port Phillip Herald”, December 26, 1948).

Three years later came the gold rush in Victoria then NSW. Prospectors, from around the world – including a Chinese minority – descended on Australia. The resulting racist attacks on the Chinese would culminate in the White Australia Policy that remained in force until 1975.

Meantime, the British were fighting the Opium Wars to open China’s ports to the mass importation of the drug from their Indian poppy fields. British “gunboat diplomacy” brought Hong Kong and trading rights to vast areas of the Yangtze

to the British crown – the same crown, incidentally, that Australia happily honours today as its Head of State.

So, let’s say China wanted to make an example of its tough bargaining posture at a time when a new American president is about to take the reins.

Indeed, Joe Biden told “The New York Times” that “the best China strategy, I think, is one which gets every one of our allies on the same page.

“[That] is going to be a major priority for me in the opening weeks of my presidency.”

Then who better to dangle overboard the ship of state than a favourite ally with a prime minister who still believes (along with miracles) that Australia’s China policy is best encapsulated in Tony Abbott’s three-word slogan: ‘fear and greed’.

The current emperor of the Communist Dynasty, Xi Jinping, has quietly visited all Australian states and territories. He knows the country well. His 2014 address to the Australian Parliament was mostly diplomatic verbiage. But towards the end, he asked: “What will China be like when it grows in strength?” His answer: “China is a large country of 1.3 billion people. It is like the big guy in the crowd. Others naturally wonder how the big guy will move and act.”

Well, now we know. If our grain and grape growers suffer, well, maybe in Beijing’s view it’s the price we pay for our colonial past… and present. 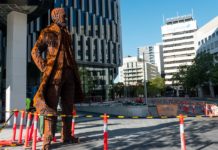 CityNews - January 14, 2021
0
Rooftop solar is growing fast, increasing by more than 17 per cent across the territory, during the last financial year.

Canberra welcomes Randwick, but not Rosehill or Warwick Farm