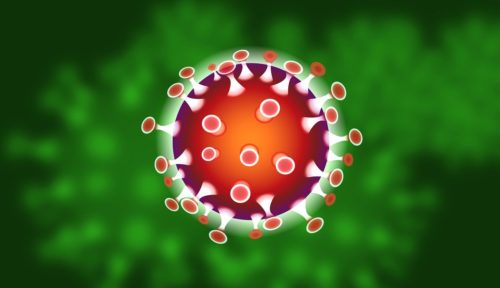 We managed to slow down COVID-19 long enough to get up close and personal. Not really, but it’s “Seven Days” with IAN MEIKLE.

WHILE making worldwide public appearances, no-one has come face to face with the coronavirus… until now.

In this exclusive interview with “Seven Days”, the coronavirus has expressed dismay at the world-wide social distancing and border closing.

Speaking through a Chinese interpreter, the virus was pleased with how things were going in Europe and the havoc it was causing Donald Trump’s America.

A: No, I hate that, it’s too clinical and coronavirus is a mouthful. CV will do. You know, as in curriculum vitae, the things lots of you are going to be reaching for soon enough.

Q: Okay, CV. We know you’re running rampant around the world, cutting a swathe through Wuhan in China and brutally punishing the Italians, so what have you got planned for Australia?

A: Well, I thought giving Home Affairs Minister Peter Dutton a dose was a bit of a laugh, but I’m not thrilled with PM Scott Morrison’s latest decision to close the borders, the bars and the cafes. I’m not a fan of social distancing, though urging Australians overseas to come home is a big opportunity for me to get a few more runs on the board Down Under.

Q: I was talking on radio [“CityNews Sunday Roast”, 2CC, 10am-noon] the other week to a very successful local comedian called Chris Ryan. She’s not fussed about you and had independently cancelled her sell-out show “I Thought it Would Be Nice” days before you managed to get the Comedy Festival canned. I asked her if it was too soon to make fun of you. She said, for her, it was, but the time would come. You worried we’ll get the last laugh?

A: Not at all, you’re at least 18 months away from a vaccine. I can cover a lot of ground in that time if you lot would stop washing your bloody hands all the time and paying attention to the government. Come on, give me a break. Throw a party, I’ll be there!

Q: Our Chief Minister Andrew Barr says: “Until a vaccine is developed, this is our new way of life and it is so important now that we respond calmly and that the measures we put in place are sustainable.”

A: Good luck with that one, Andy. I saw your lot at the supermarkets. You’re all so smart and clever, mouthing nationalistic nonsense about how Australians stand together, yet you break out into biffo over a toilet roll!

A: Yes, I wasn’t expecting that this soon, I mean I’ve only infected a few people in your town, though getting into that woman on poor old Murray’s charabanc from Sydney airport was a masterstroke, you’d have to agree; a whole busload of inconvenienced people for the price of one.

And what was with that Art Not Apart festival? They were hellbent with their comms guy Michael Liu popping out a taunting press release spouting that “if ScoMo is still going to the footy, then we are definitely still going to celebrate the arts”. The PM cancelled, but they didn’t.

And when he wrote: “It was clear from the PM’s press conference that it remains a low-risk activity to attend public events, and healthy event-goers are encouraged to stick to their plans this weekend”, I couldn’t resist. That gave you a scare, didn’t it?

Q: There have been more than 2500 people tested in the ACT for COVID-19 with comparatively few confirmed cases. You can’t be happy with that.

A: No worries. It will get bigger. And as winter draws in I’ll be in the company of all the other viruses that beset your community. Be sure not to get that flu shot!

Q: It’s election year in the ACT, you planning to be around for the October poll?

A: I’m going to do my darndest if you don’t flatten that infection curve. But with Labor having got you lot into debt by three billion, going on four billion dollars, the budget’s shot and the state of your tram-trashed health system is terrible. Even I’m feeling sorry for you trying to cope with the economic and health overloads I’m dumping on you.

Q: You’ve closed Canberra Theatre, cinemas, music festivals – heaven knows how the Folk Festival and the International Music Festival will struggle back – and sent the city into a virtual hibernation. Proud of yourself?

A: Absolutely. It isn’t all bad, people will be spending intimate time together. I heard a joke about what do you call the progeny of the self-isolation generation? The Quarantinees! I have to get going, I still have a lot to do.

Q: Thank you CV, we hope we don’t see you anytime soon.