“Listening to whingers complain about hotel rooms and the food delivered for them gets up my nose. And drawing a prison comparison is hyperbole. Anyone who has been in a prison must have been cringing at such a ludicrous comparison,” writes MICHAEL MOORE.

BEING quarantined for a couple of weeks in an InterContinental Hotel, or even the Ibis, is not akin to prison. Self-centredness blinds some people to reality.

Separating “at risk” travellers from the community is simply an effective public health measure deployed in a time of crisis.

Listening to whingers complain about hotel rooms and the food delivered for them gets up my nose. And drawing a prison comparison is hyperbole. Anyone who has been in a prison must have been cringing at such a ludicrous comparison.

Even the modern prison in Canberra is certainly no InterContinental. Prisoners do not have open access to the internet, as one example. There is limited connection to loved ones. Where is the sense of community? The attitude contrasts with the majority who accepted quarantine in good humour to prevent the spread of the virus.

The COVID-19 crisis is testing us as human beings. It is separating the self-centred from the altruistic. Separating the wheat from the chaff. The majority of our population are now playing their role by remaining in their homes. And it is hard.

Our society works on being connected and by sharing space. Showing that you care over the internet is possible. However, not being able to hug, gather together and share space with extended families, including children or grandchildren is distressing.

There are also many lessons to be learnt. How well have Australian governments handled this outbreak?

The long-term preparation was not good enough thanks to constant cuts to preventive health. The constant push for less and less tax combined with a drive for a surplus has been given far more priority over the health of the population.

Messaging should come from an independent Australian Centre for Disease Control funded by all jurisdictions. Instead, as strong as they might be, having our chief medical officer and his deputy providing leadership is undermined by their role as public servants. Public servants may give frank and fearless advice.

However, such advice is conveyed in private before a political decision. It is then the role of public servants to deliver on the government’s decision. The community is right to question how much of the advice was watered down.

Prime Minister Scott Morrison’s National (War) Cabinet was to present a unified approach. However, there are problems.

Firstly, including leaders of the oppositions would have been more inclusive and provided a clearer message.

Secondly, examples such as the Labor Victorian Premier and Liberal NSW Premier taking a harder line against the Prime Minister’s approach simply added to the impression of inconsistency for the federal government.

The National Cabinet should also have included representation from local government. There are so many important public health roles played at the local level that being included in the decision making process would have improved the outcomes. Regional areas are suffering from the spread of the virus and often do not have the necessary health infrastructure to deal with the seriously ill.

Yet another example of self-centred approaches is the public wearing of surgical masks. These should be reserved for health-care workers on the front line.

There are two main reasons. Such equipment is in short supply and is vital and protects our front line health workers. They do not work in the general public, let alone out in the fresh air while walking the dog in a maximum group of two people.

A review from the Center for Infectious Disease Research and Policy at the University of Minnesota stated as part of its conclusion: “Respirators are the best choice for protecting healthcare and other frontline workers” and “leaving aside the fact that they (surgical masks) are ineffective, telling the public to wear cloth or surgical masks could be interpreted by some to mean that people are safe to stop isolating at home”.

Whether it be “imprisoned” in a hotel, inappropriate wearing of masks, or isolated at home, a co-ordinated process is necessary to manage the “least worse solution” to the spread of this virus.

We may do better in the future. In the meantime, the biggest contributors to managing the virus are the people who are doing their best to follow the advice from the Department of Health. 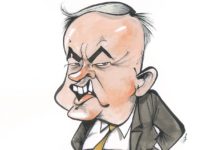 Paul Costigan - May 25, 2020
0
"Canberra Matters" columnist PAUL COSTIGAN reports on enthusiasm from the inner-south as bulbs go into the soil for Floriade Reimagined.