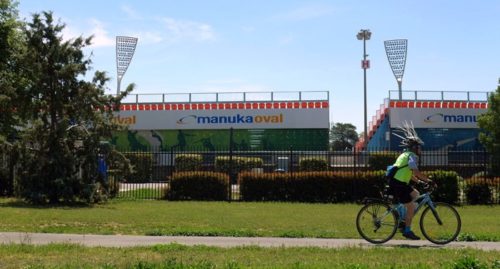 ACT border restrictions have locked out Canberra’s adopted AFLW side from embracing an urgent preseason training in the capital.

GWS Giants have been forced to temporarily relocate from Blacktown to Albury following the coronavirus cluster in the state’s northern beaches that has impacted residents of Greater Sydney.

The recent outbreak could potentially still affect the Giants’ away opener against Fremantle on January 31 considering Western Australia’s past strict border stance.

The women’s team will relocate to Albury instead of Canberra where the club are scheduled to host Gold Coast Suns on Sunday, March 6 at Manuka Oval.

Players, coaches and officials are required to remain on the NSW border for 14 days in a quarantine bubble before entering Victoria for a practice match in mid-January and then travelling west a further 14 days later to play at Fremantle Oval.

Giants general manager of football, Jason McCartney, said the movements are expected to satisfy current Victorian government requirements, which should then in turn satisfy entry into Western Australia.

“While leaving Sydney is far from ideal this close to round one, it’s the only course of action currently available to ensure the season has the best chance of running as planned,” he said.

CityNews - March 4, 2021
0
ACT Corrective Services commissioner Jon Peach has been promoted to a new role within the Justice and Community Safety Directorate where he will coordinate security issues at a national level.