Every supermarket sells blueberries, but why not try growing them at home, suggests gardening writer CEDRIC BRYANT.

ENJOY them fresh, with ice cream or on breakfast cereal, as a jam or even a wine. Every supermarket sells blueberries, but why not grow them at home?

Blueberries were first imported into Europe from North America in the 1930s. Commercial production in Australia didn’t start until the 1970s, when the Victorian Department of Agriculture imported seeds from the USA.

Interestingly, North American Indians were harvesting blueberries in the wild for several centuries before European settlement.

Clive Blazey of the Diggers Club suggests blueberries have the highest antioxidant levels, gram for gram, of any fruit.

Blueberries, which are self-pollinating, grow well in this area. They thrive best in acid soil, the same as rhododendrons and camellias, blending in well with these with their white-to-pink flowers and brilliant autumn leaf colour. Similarly, blueberries must be grown in well-drained soil, and at least eight hours sunlight a day is essential.

Plant 1.5 metres apart and mulch well, as blueberries have a shallow root system, similar to other acid-loving plants. When first planted and for the first few months, feed regularly with an organic liquid seaweed plant food.

It’s vital the soil doesn’t dry out, as with all fruiting plants, so the ideal watering system is the drip method. The fruit is borne on the previous season’s growth, with vigorous new wood producing the most fruit. Birds love to eat blueberries too, so netting is vital once the flowers appear.

Heavy pruning should not be done in the first four years, except for shaping and removing dead or spindly growth in the dormant winter period. Harvesting usually happens in December, when the fruit turns a deep purple. Store them fresh in the fridge, or freeze without any loss of goodness.

CEANOTHUS, or Californian lilac, is native to many parts of the USA. Like blueberries, North American Indians used the leaves for an alternative to our tea and for medicinal purposes.

They were once popular in gardens here, and in 1979 Ceanothus “Blue Pacific” was named as the shrub of the year. This one grows to about two-metres-plus, although there are numerous other low-growing varieties. Their popularity waned, mainly due to not understanding their management. Unlike most shrubs, if left for a number of years and then pruned back into the old wood, it never grows back. Prune immediately after flowering, by up to but not more than, one-third. This can be used as a hedge or individual plant. They are extremely drought tolerant.

MOST lemons have now finished fruiting. No systemic pruning is usually necessary, but now is a good time to carry out a light prune, shortening long, scraggly branches and taking out any dead, diseased or damaged wood; usually caused by storm damage. Follow this up with a feed.

DON’T throw away a potted cyclamen if the leaves have died down. Plant it in the garden in a semi-shady spot, underneath deciduous trees, where it can receive winter sun. If in an ornamental pot, simply turn it on its side for the summer. By early next autumn, stand it upright and start regular watering. Make sure the potting mix is well saturated before applying liquid seaweed fertiliser, which will encourage new root growth.

THE scraggly, messy-looking leaves of spring-flowering bulbs can be cut to ground level and put in the compost. Any bulbs in the wrong spot can be dug up now. I find orange bags are ideal for storing bulbs, as they provide good circulation. Hang in a dry, airy place such as the garage or shed until planting time next March. 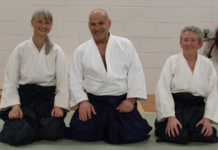