La Sable Patisserie, which has two shops based in Mitchell, stopped taking keep cups on Monday (March 16) and other cafes across the region, such as Coffee Guru in Crace, have since followed.

“We’ve gone over the top. We’ve stopped [accepting] keep cups, we’ve stopped self-serve cutlery, water, cups and sugar,” says Ben, who is an asthmatic and falls into a higher risk group in the face of COVID-19.

“I looked at everything. Sugar went. How many people come in and play with sugar?”

Ben says most customers have been understanding but there are a few that have said they’ve gone over the top with it.

“People will bring them in and ask us to rinse them.” 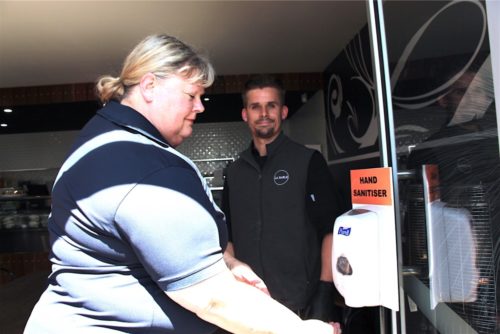 But other than that Ben says everyone’s been really good, and customers have even been using the hand sanitiser dispenser he put at the entrance of the cafes so people can sanitise their hands when entering.

“Everyone’s been really good, sanitising when they walk in and when they leave,” he says.

“We’ve been sanitising tables and chairs, and anything that might be touched, every half hour.

“Our priority is our staff and our customers to stop the spread [of the coronavirus] and to protect them, too.

“We’re trying to focus on things we can change. The coronavirus is out of our hands but we’re thinking about what we can do to grow and adapt to what’s happening and move forward.”

Businesses are working during an unprecedented time, and Ben says they will take every measure they can to keep going.

“We have to work to survive, we’re all in the same position,” he says.

The thing that concerns Ben the most is the unknown but he says he has plans in place if things get worse.

“If it does get worse we won’t have any tables or chairs, it will be takeaway only,” he says.

“And if it gets really out of control, we’ll be offering online delivery on the north side, in the Gungahlin area.”

The kitchen’s the same, according to Ben, who says all of the staff are wearing gloves and sanitising as often as possible.

“Everything is takeaway as well.”

And all the measures will be in place as long as the cafes need to have them in place for the protection of the staff and the customers, says Ben.