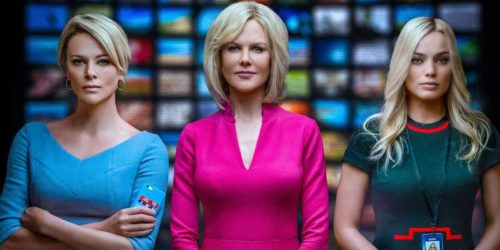 JAY Roach’s film, about a sexual harassment scandal in Rupert Murdoch’s US flagship money earner Fox News, arrived in Australia on the heels of a longish pre-release campaign that titillated rather than informed potential filmgoers about what it was about.

Making headlines in America in 2016, the scandal involving Fox News CEO Roger Ailes (John Lithgow) was the medium being the message, an in-house version of the #MeToo movement that began in 2006 but didn’t reach full flowering until Harvey Weinstein gave rise to Alyssa Milano’s Twitter feed.

To get a clear view of it, you would have needed to live in the US where the core participants were household names by virtue of being anchor-persons on Fox TV news programs. Leading the pack, Megyn Kelly (Charlize Theron), one of the network’s biggest stars, was preparing to interview Donald Trump, including asking about his sexist comments about women.

After Gretchen Carlson (Nicole Kidman), the co-host of “Fox and Friends”, was demoted to a less-prominent program, outspoken material led to her dismissal.

Megyn and Gretchen are real people. Kayla (Margot Robbie) is a fictional character symbolising the quite large number of young women from whom Roger demanded sexual favours as precursors to employment advancement. Ms Robbie has said that a scene in Roger’s office, requiring her to show her knickers, was uncomfortable to film. And to watch.

Those three women are played by Oscar winners who also happen to be beautiful. The film’s pre-release publicity was silent about a fourth Oscar winner. Roger’s attorney Susan Estrich doesn’t appear until after the manure hits the propeller. Playing her is one of my favourite actresses and a joy to see on screen – Oscar winner Allison Janney.

Of necessity, Charles Randolph’s screenplay involves many characters whose place in the corporate hierarchy is not always clear and who are seldom on screen for more than a few seconds at a time before flicking to somebody else.

The list of Oscar nominees from “Bombshell” is brief – Charlize Theron for best leading actress, Margot Robbie for best supporting actress and a three-person team handling hair and make-up. I was disappointed not to see John Lithgow’s performance nominated or whoever led the large editorial team charged with assembling all those snippets into 109 more or less coherent minutes of movie that didn’t really excite me.