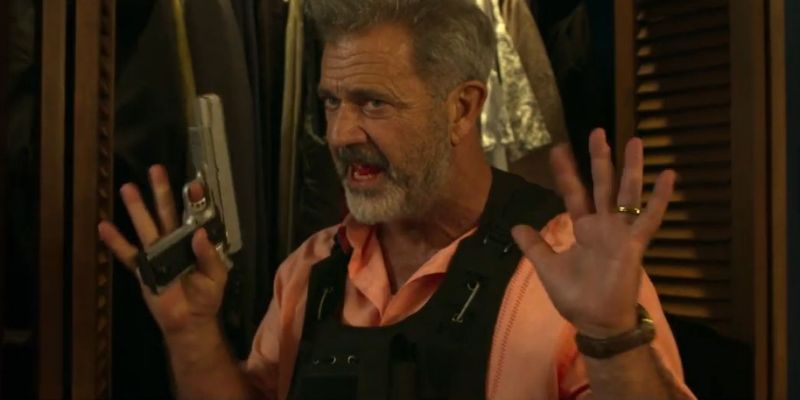 SET in Puerto Rico, the film begins with an altercation about Afro-American Griffin (William Catlett) who’s trying to buy all the mince meat in a supermarket fridge for a pet named Janet.

When a category five storm hits the island territory, job-weary cop Cardillo (Emile Hirsch) together with female cop Jess Pena (Stephanie Cayo) is sent to supervise the evacuation of an apartment building. Griffin lives in that building. So does ailing retired cop Ray (Mel Gibson) whose medico daughter Troy (Kate Bosworth) is trying to persuade him to leave. And there is an old man of European extraction who refuses to leave.

To this mix of good people needing evacuation from the building, add trigger-happy psychopath John the Baptist (David Zayas) and his bunch of villains carrying military-grade long arms that they use on anybody they don’t like. What in the building is so valuable that they are prepared to slaughter innocent bystanders to acquire?

Around that collection of characters and environments, director Michael Polish sets about telling a small collection of stories comprising the feature-film debut screenplay of Cory Miiller.

It’s a copybook application of the dramatic unities (place, time, environment, people) with rising and falling tensions and the weather’s embrace never far from the action.

Those three stars at the top of this review are down principally to Mel Gibson who dies usefully and gracefully. And Janet. Remember Griffin’s pet Janet? When John the Baptist has all the good folk at his mercy, she’ll save the day. It’s only a two-second appearance but an effective one, only minutes before the film ends and worth waiting for.

At Dendy and Hoyts