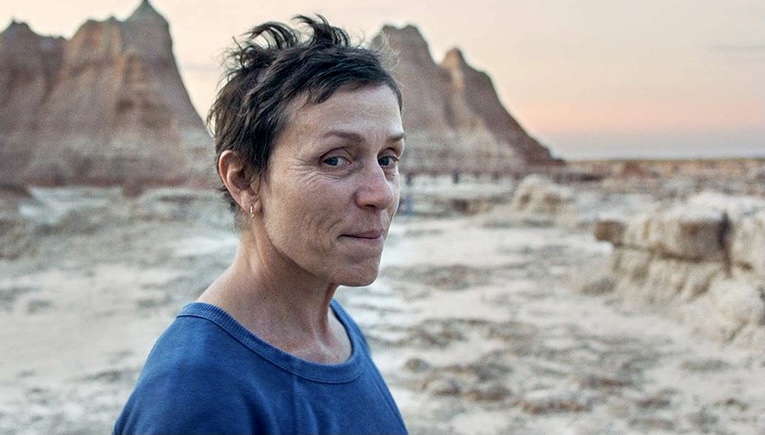 AFTER a mercifully short listing of its producers and a title explaining where the film is coming from, Chinese-born director (and co-writer with Jessica Bruder who wrote the book), Chloé Zhao’s film takes not more than a minute to make a profound comment.

Sharp-eyed filmgoers will notice the merest, most subtle, change in Frances McDormand’s facial expression. It forebodes a superb performance. And what follows is so.

McDormand plays Fern, a widow, the last resident to leave Empire, Nevada, after the town’s single industry closed its 88-year old factory and the US Post Office cancelled its zip code. Fern is something of a polymath where jobs are concerned. After a stint in the Amazon distribution centre, she gathers up the necessities, packs them in her SUV campervan, and takes to the road.

I am a McDormand fan. Now in her mid-60s, she’s no feather-headed beauty. She’s a two-time Oscar winner. That says a great deal.

“Nomadland” has no perceptible plot. That doesn’t mean it’s a documentary. Nor does it show any hint of scripted dialogue as it follows Fern along minor roads in several of America’s middle states that, like in our island continent, are mainly desert. She’s in no hurry. She is good with people.  She bears no resentment for the tough hand that life has dealt her. She makes friends. She helps people. People help her. Dave (David Strathairn, one of the very small group of professional actors in a listed cast of 48 people) might like to develop a relationship with her.

I heard about “Nomadland” around about its first release at a big scrunch of film festivals beginning in Canada in September. It has been worth waiting for.

CityNews - May 11, 2021
1
More than 500 submissions have opposed a change to the current territory plan that could see a Griffith property rezoned to allow for medium-density units.