A VETERAN Canberra artist who creates ravishing, sophisticated works on paper has been named 2020 “Canberra CityNews” Artist of the Year.

Ainslie artist Julie Bradley was singled out by the Canberra Critics Circle judging panel for a remarkable year, in which she undertook a residency in Ireland then returned to mount a huge exhibition at Belconnen Arts Centre, “Evocation”, of paintings using swirling gouache washes on collaged Japanese papers to convey the emotional effects of place and weather.

Bradley received a certificate and cheque to the value of $1000 from “CityNews”, and craft critic Meredith Hinchliffe presented her with a set of finely-crafted, stainless-steel spoons by Canberra artist Alison Jackson.

Bradley, whose work is held in the collections of the NGA, the ANU, CMAG, Calvary Hospital Birth Centre, Canberra Hospital and the Lu Rees Archives, has been an artist for more than 35 years.

A left-wing surfer girl from the southern suburbs of Sydney, she was urged by artist and critic Geoffrey de Groen to apply to the old School of Art in Canberra and was chosen in 1979 to study under influential printmaker/artist Jörg Schmeisser – “wonderful people there”, she says. 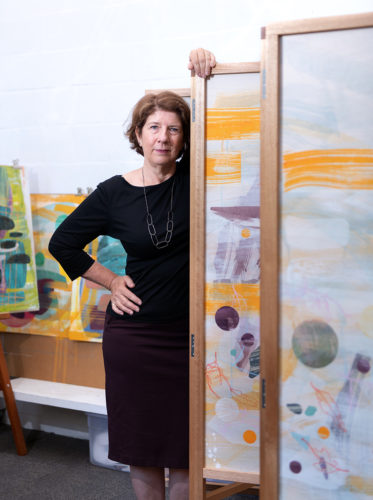 When her folk-musician husband Kevin Bradley got a job at the NLA, where he is now ‎assistant director general, the pair settled in Ainslie and started a family while Julie took up a lectureship in graphic design and illustration at the University of Canberra.

Kevin continued his music practice, often in their lounge room and Julie found herself painting murals, designing the sets for UC Players, and getting involved with cultural activities involving their fast-growing artist daughter, Jacqueline, now also a well-known artist and musician.

After 20 years at UC, Julie resigned, dyed her hair, took up a Bundanon arts residency which she describes as “a shot in the arm” and threw herself into art full time. As well, through her memberships of M16 and ANCA, she became known as a mentor to up-and-coming artists.

In the past year she used her 2019 CAPO Fellowship and a handsome travelling grant from ArtsACT to take up a residency at Ireland’s Ballinglen Arts Foundation in North West County Mayo, where Julie produced enough art to exhibit in Ballycastle and Galway, and Kevin connected with his long-held love of Irish music.

Back in Canberra and inspired by her Irish sojourn, Julie Bradley has become, the critics say, a very worthy “CityNews” Artist of the Year.

Earlier in the evening at the ACT Arts Awards, the Helen Tsongas Award for Excellence in Acting was presented by ACT Arts Minister Tara Cheyne to Lainie Hart for a remarkable body of work over the past year, which included both live and screen performances for Lakespeare & Co, The Q and Canberra REP.

0
“My Salinger Year” offers a view of a craft that seldom exposes what goes on between writing a book and its appearance on a retailer’s shelves, writes movie reviewer DOUGAL MACDONALD.