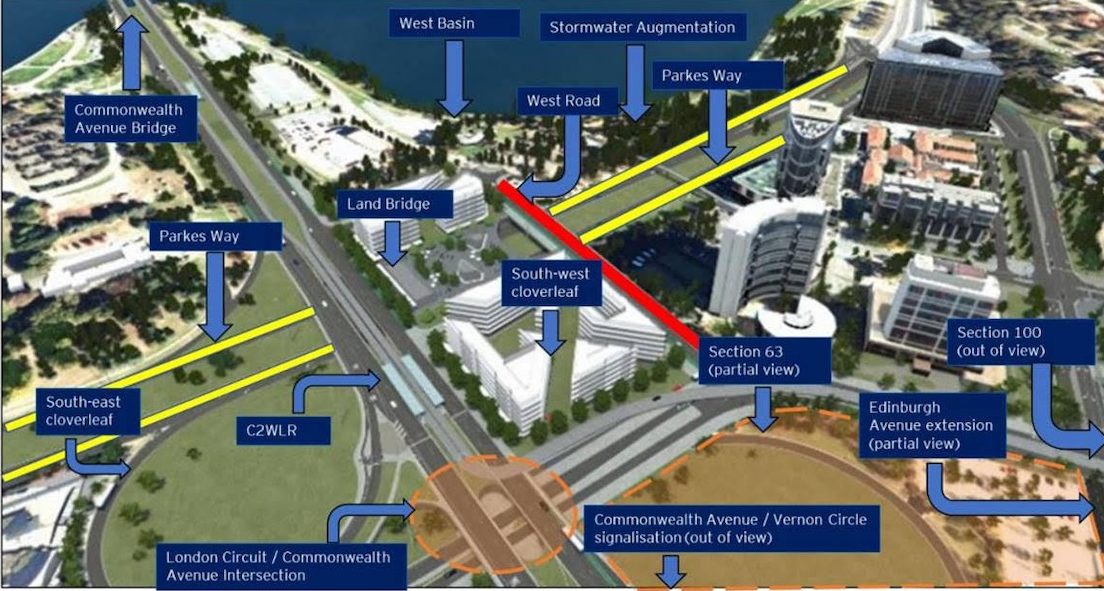 AN illustration buried more than 50 pages into a 185-page study reveals the extent of the transformation of West Basin proposed by the ACT government, according to a guardian of the lake.

Juliet Ramsay, co-founder and secretary of the Lake Burley Griffin Guardians, claims the plan reveals the nature of the government’s ambitions for the area, in what she describes as a “ghastly proposal.”

“No wonder the ACT government hasn’t released their development plans for the area,” Ramsay said.

“There are buildings all the way to Henry Rolland Park, a huge high-rise complex on the clover leaf and noise from the tunnel [proposed land bridge over Parkes Way] will damage the liveability of New Acton.

“It’s an absolutely ghastly proposal of what is happening in West City [West Basin area].”

The plan, buried within the “City to Woden Light Rail: Stage 2A City to Commonwealth Park Business Case”, prepared by Major Projects Canberra and endorsed by ACT Cabinet in 2019, details projects currently in planning or in development in and around the Acton Waterfront and City Hill.

The plan as outlined, also states it is anticipated to accommodate an additional 15000 residents in the Acton Waterfront development.

A note at the bottom of the plan states the projects should be viewed as “indicative” and subject to further consideration by the ACT government.

“It is more than three times the number of people in the whole of Kingston including the foreshore.

“It is terrible planning, such a huge number would need schools, childcare and parking.”

This latest revelation leaves a huge question mark over the figures referred to by the Labor leader Andrew Barr in describing the scale of the proposed development.

The Barr government hasn’t put an exact figure on the number of apartments that would be permitted under its plan, although Mr Barr has said it would number in the hundreds, rather than the thousands as previously suggested.

Mr Barr has previously pointed out that housing in the precinct would be controlled by federal government-approved planning rules, which require that development be set back 55 metres from the lake’s edge and not be taller than 25 metres at any point.

“The whole story of the West Basin is a tragedy and it’s been going on since 2004,” Ramsay said.

“We’ve been saying for a long time, the damage that has been done to the lake and the spin that has sprouted and the lack of decent community consultation… it’s turning a beautiful city into something like a worst-case Chicago-like city.

“There’s no respect for the lake and its parklands, they are mining the lake and parkland for as much money they can get.”

The approval for stage two of the $32 million project includes an extension of the boardwalk, which will see some of the lake filled in, to establish a new lake edge. Queanbeyan construction company Chincivil has taken on the estimated two-year project after winning the contract.

The project has become a key issue in the race to Saturday’s election, with the Canberra Liberals promising to abandon the government’s plans for West Basin if elected. Instead the Liberals would ask the community to decide what’s best for the area.