“Chalet Monet – Inside the home of Dame Joan Sutherland and Richard Bonynge”, by Richard Bonynge. Forward by Marilyn Horne. Reviewed by BILL STEPHENS.

IT wasn’t the appearance of Chalet Monet, but its position, that attracted the attention of Richard Bonynge back in 1964.

The Bonynges – Joan Sutherland and Richard Bonynge – on the advice of their friend, Noel Coward, had been looking to buy a chalet in Switzerland to provide a central base for the constant travel demanded by their busy schedules, but once he discovered it, only Chalet Monet would satisfy Richard.

The chalet required two years of renovations before they could even move in, but over the years they transformed the ugly duckling into a fairytale family home, into which they welcomed family and special friends.

In the process it also became a repository for their collection of magnificent furniture, paintings and objets d’art, gathered during years of travel.

“Collecting is a disease, and I’ve got it bad,” says Bonynge when talking about his collection, and this sumptuously-produced coffee table book is certainly testament to that.

Bonynge and Sutherland have been the subjects of many biographies and picture books during their careers.

Sutherland had published her own autobiography, and Bonynge had produced books featuring his collections of costume designs and theatrical postcards. But there are few things more satisfying than sharing your treasures with like-minded enthusiasts, and so, judging from the twinkle in his eye, captured in Justin Hession’s photographic portrait at the beginning of this book, it didn’t take a lot of persuasion from The Joan Sutherland and Richard Bonynge Foundation, for him, now in his 90th year, to agree to the publication of “Chalet Monet” as a way of sharing the collection, while raising money for the Foundation’s scholarship program.

Photographer Dominique Bersier has captured Bonynge’s enthusiasm for collecting, as well as the interior and exterior of the chalet and its surrounding scenery, in hundreds of full-colour images which make up the body of the book.

In addition to Bersier’s photographs, there are also dozens of photographs culled from their private files, of the Bonynges in rehearsal, performing, and relaxing with their family and celebrity friends.

Bonynge’s writing style is delightfully conversational, and it is easy to imagine him present, escorting the reader on a personal tour through each of the rooms. You can sense the enthusiasm which bubbles through his explanations as he talks about the significance, the circumstances surrounding each purchase, and the memories each evoke.

His collection has many strands. He has a particular fondness for images of singers, both contemporary and historical, but especially Jenny Lind, Maria Maliban and Nellie Melba, and there are chapters in the book devoted to each. He also collects snuff boxes, DVDs, antique books, coloured glass and anything else which captures his eye during hours spent poring through antique shops and markets during breaks in rehearsals.

There are several pianos in the chalet, one of which belonged to Coward, another from Buckingham Palace, each weighed down with autographed photos of celebrity friends and family. 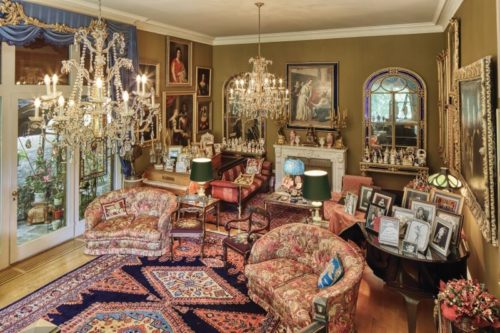 Each room is lavishly decorated, with its own individual colour scheme, chandeliers, mirrors and walls covered in paintings, many antique, but including portraits of himself and Joan painted by June Mendoza, Judy Cassab and Michael Stennett, Sutherland’s favoured designer for her costumes and recital gowns.

Although it’s 10 years since Sutherland died, she is very present in “Chalet Monet”. Her apartment on the first floor remains as she left it. Bonynge confides that her concert gowns still hang in nine big wardrobes in her dressing room; that they found her charming 18th century bed in Genoa in 1961, and that her little Georgian bureau, which she sat at to attend to her correspondence, was one of their first purchases from the Portobello Markets, costing just £45.

In almost every room there are portraits and photographs of Sutherland, either in costumes or relaxing. She is depicted in several bronzes and her intricate needle-point embroidery decorates much of the furniture throughout the house. 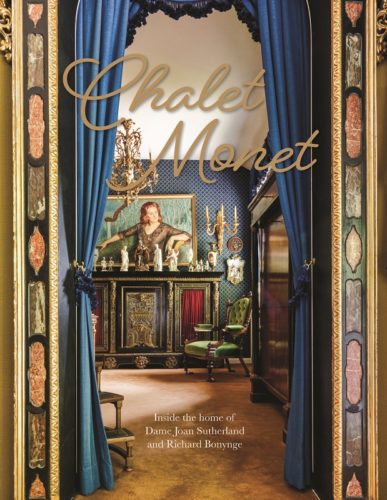 Sitting in a corner is a small drum converted into an occasional table with a glass top. That drum, Bonynge confides, was used by Sutherland in her first performances of “La Fille du Regiment” at Covent Garden in 1966, and presented to her after her very final performance at the Royal Opera House on New Year’s Eve, 1990.

Moving through the rooms, Bonynge recalls particular collecting triumphs, recounting how he began his collection of original manuscripts, many signed by the composers. He gleefully recalls persuading painter, Arbit Blatas, to sell him the best of three portraits of conductor Toscanini that Blatas had painted for a museum, and the time when he persuaded a young airways employee to help him smuggle an old painting of the last king of the Aztecs out of Peru. He points out a beautiful painting of Italian soprano Giulia Grisi, which he purchased for £1 in a junk shop.

Not everything is treasure however, and one wonders which of his cherished grandchildren left behind the plastic action figure standing proudly among the antique books and artefacts photographed on page 171.

This is a ravishing publication which will be treasured not only for the hundreds of beautiful images which delight the eye at every turn of the page, but also for the charming insights it provides into the private and personal lives of two extraordinarily talented and gracious individuals who have dominated the world’s opera stages for generations.

It will also be treasured by this reviewer who discovered to his delight, included in a montage of mostly antique posters on page 285, a poster for “The Maestro and Me”, a recital he arranged at which Richard Bonynge accompanied soprano Deborah Riedell on piano.

“Chalet Monet – Inside the home of Dame Joan Sutherland and Richard Bonynge”, will be released on October 21 and can be purchased via Melbourne Books, $95.

Helen Musa - April 16, 2021
0
In a mighty affirmation of Canberra-made theatre, The Street Theatre was named on Tuesday (April 13) as a recipient of a 2020 Sidney Myer Performing Arts Award.