WITNESS J, the prisoner held secretly in Canberra’s Alexander Maconochie Centre for more than seven months, is soon to publish a book on his incarceration with some of Australia’s most odious paedophiles. 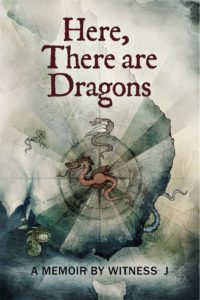 Titled “Here, There are Dragons”, it will be published online via Amazon and Lulu. Both paperback and e-book will be available on demand. While it is self-published, it has been professionally designed and edited at a cost of some $2500.

All profits will go to Beyond Blue, partly because of proceeds of crime legislation but also to acknowledge the work of the charity that assists those like himself who have suffered mental health issues in times of stress.

Witness J told “CityNews”: “I’ve spent a bit bringing it to market. I accept this cost as I want my humble story to be told. Due to an unfortunate combination of my literary inexperience and ongoing anonymity, I’m rather restricted from promoting the book outside of Twitter.”

The official publication date is June 1.

Witness J’s secret trial and incarceration was first revealed by “CityNews” late last year when he brought a civil action against the AMC authorities after his cell and his brother’s home were raided by the AFP. This followed an attempt to seek literary and publishing advice from myself as the author of some 29 books.

The action was unsuccessful, but the revelations of his imprisonment made national headlines.

The book is an extraordinary and compelling story of a Canberran from a well-respected family who graduated from Duntroon, served with great distinction for 10 years in battlefields from East Timor to Afghanistan and later with DFAT in sensitive civilian posts. The circumstances that led to his trial and imprisonment took place during his posting to Indonesia.

However, while the story of his career – and the actions that led to his imprisonment – have yet to be told, the saga of his time confined with sexual offenders at AMC is itself a fascinating account of the moral conflicts and outrages when forced to deal at close range with the human “monsters” of the title.

Perhaps the most remarkable aspect of the book is the fact that he was able to write the story while actually serving his time in the same “Pod” as the characters he was forensically delineating. (Disclosure: I have written a foreword to the book)

Since his release, Witness J has been living in Victoria seeking employment while pursuing some redress from his former employer.