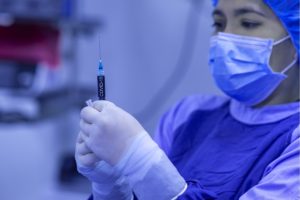 The research has also found that 58.5 per cent of Australians say they will definitely get a COVID vaccine once it is available, but six per cent of the population definitely won’t, with another seven per cent  saying they will probably not get the vaccine.

The analysis, led by the ANU Centre for Social Research and Methods, examined COVID-19 vaccine hesitancy and resistance, and builds on a survey of 3000 adult Australians.

It’s the first representative longitudinal survey with more than 2000 respondents that examines the demographic, political and social attitudes to a covid vaccine.

Study co-author, Associate Prof Ben Edwards, said the analysis revealed which groups in Australia were less and more likely to “get the jab” once available.

“Overall, there are significant levels of vaccine hesitancy or resistance across Australian society,” he said.

“We found females, those living in disadvantaged areas, those who reported that risks of COVID-19 were overstated, and those who had more populist views and higher levels of religiosity were more likely to be hesitant or resistant to a vaccine.

Compared to Australians with a Year 12 qualification only, those with an undergraduate or postgraduate university degree were less likely to be resistant or hesitant to a vaccine and more likely to intend to be vaccinated.

The analysis also found 28.7 per cent were likely to get a vaccine but were still not certain.

“To open up our society, economy and community fully again, we need to develop a vaccine and get it out to the population as quickly as possible,” study co-author Prof Nicholas Biddle said.

“Our findings show vaccine hesitancy, which accounts for a significant proportion of the population, may be addressed by public-health messaging.

“But for a significant minority of the population with strongly held beliefs, alternative policy measures may well be needed to achieve sufficient vaccination coverage to end the pandemic.”

CityNews - January 20, 2021
0
Police are searching for 36-year-old Rian Minnis after he went missing on Thursday, January 14.