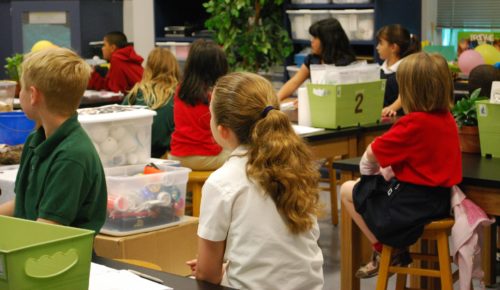 PRODUCTIVITY Commission’s latest data has indicated that the ACT government’s recurrent expenditure on most Canberra students have been falling since 2008.

The Australian government’s principal review and advisory body for a series of issues that includes microeconomic policy has found that across a number of important measures the ACT has slipped behind over the past three terms of government.

It was revealed in the estimates hearings this week that the federal government has lifted funding by around 20 per cent over the past decade, leading the ACT Opposition to assess that expenditure spent on Canberra public schools has been “flatlining”.

That maximum capacity stretched to nearly 150 temporary buildings being installed across Canberra that includes 17 during this school year to help ease the burden on government-funded schools.

The demountable buildings have come from an order from the Education Directorate.

But the ACT government says there is no cause of concern for either principals, teachers and parents that spending is not being concentrated on students.

The government, which funds ACT public school infrastructure, says the extra classrooms labelled “transportable learning spaces” is a result of a growing student population that extends to major upgrades to both existing and new schools.

It is part of the government’s claim of investing more than $1.1 billion since 2009-10 in public school infrastructure.

A separate recent report but on 2021 Australian government services that relates to the 2018-19 financial year suggests the ACT has the second highest investment per student among Australian public schools that includes investments made from both governments.

A spokesperson for Minister for Education Yvette Barry stated that the ACT has consistently provided the highest level of investment in public schools in Australia since 2013-14 all the while receiving the lowest funding per student funding from the federal government.

The report adjusts expenditure per student from a general government final consumption expenditure chain price deflator to reflect the prior year’s data in “current” dollar terms.

The ACT has recorded average growth of more than two per cent in funded expenditure from 2009-10 to 2018-19, the report figures indicate.

In relation to growth in payments from the federal government, the ACT averaged around four per cent that had slipped below the national average of 5.7 per cent.

The spokesperson said: “It is not directly comparable to figures reported annually by the ACT government, (which we) have made very substantial investments in public school infrastructure to cater for growth and demand – expenditure which is not captured in the cost per student data presented.”

CityNews - April 20, 2021
0
Even though Canberra GPs have "thrown their support" behind the ACT government's plans for five new nurse-led walk-in centre, the Royal Australian College of General Practitioners (RACGP) fears they could lead to fragmented care.