“WHAT’S the most horrible character I can come up with, but have the audience still like him?”

That’s the question forming the basis of one Timothy Blake, the cannibalistic yet charismatic FBI consultant at the centre of Canberra author Jack Heath’s new thriller novel, “Hideout”.

“There always seems to be room in the culture for one anti-hero of any moment,” said Jack.

“It was Dexter, then Walter White, Jack Bauer even before them. There’s a fascination audiences have with them.”

“Hideout” is the third instalment in the “Timothy Blake series” that sees Heath’s titular character trading his brilliant detective skills for bodies to satiate his cannibalistic desires.

It’s just one of around 30 novels published by the author over 15 years of dedicated work and it seems writing was always in Jack’s blood.

“I grew up in a house filled with books. There was always something to read,” said Jack.

By 13 he had begun writing his first novel. By 19 it was published.

“When I got to high school there was this certain seriousness to the books I was reading, not the fantastical escapism I grew up with like Jackie French or Morris Gleitzman or Paul Jennings,” he said.

“I started writing my own sci-fi spy thriller. Enough people liked that for me to turn writing into a career. I was extraordinarily lucky.”

That book, “The Lab”, was the first of a stream of stories bursting with imagination. From runaway trains to espionage, serial killers to magicians, Heath’s work spans genre and tone alike through his eclectic writing style.

He’s primarily built his career writing fiction for children and young adults. Especially renowned is his “Danger Series”, which features short, tense stories that put his characters against a clock counting down in the page margins as the audience reads.

In January last year he published his newest entry in that series, “200 Minutes of Danger”. The pacey tales have made them a great entry point for young and reluctant readers. 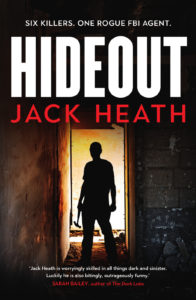 Now with “Hideout” though (and its two predecessors “Hangman” and “Just One Bite”) Heath has more than decidedly written for an older audience.

“Fiction for adults is much easier,” said Jack.

“With kids you have to be careful, especially because what the parents want their kids to read and what the kids themselves want to read is often very different. With adults you can be gleefully irresponsible and that’s what I’ve done with this series.”

The Timothy Blake books have been handed critical praise for their bold and arresting style and Jack has found writing these stories personally eye opening for his perceptions of the world and himself.

“As a society and culture, we have this desire to see bad people punished. That’s something I really wanted to explore with this series,” he said.

“I wanted to ask the question; at what point should we look in the mirror?”

Jack moved from Sydney to Canberra in the late ’80s and loves to live and write here.

“I find Canberra a great place for everything,” he said.

“There’s a diversity of different people here, you get a great cultural mix from different backgrounds and different industries, and it’s of a size that makes it all still feel like a community.”

Now Jack has made his home in Charnwood with his wife and two children, aged six and one.

“It’s a balancing act to write full time and support a family, but it’s a privilege I never take for granted,” he said.

“Being able to write during the day while the kids are at school is great, but when they come home I get to switch off my ‘cannibal noir writer brain’ and I get to just be ‘Jack the Dad’.”

Jack’s not slowing down moving, either. With another Timothy Blake book lined up for next Christmas and two comedy books also set to release within the next 12 months, we can certainly expect to see much more of him.

CityNews - April 6, 2021
0
Evoenergy is proposing a "substantial increase" to electricity prices in the ACT during the 2021-22 financial year, blaming the suggested jump on ACT government renewable policies and taxes.