A PART of M16 Artspace in Griffith is about to be transformed in a way it’s never been before – into a prison cell.

The exhibition, “Framework of Injustice”, is by portrait painter Melissa Beowulf. It’s not portraiture this time, but rather an enclosed box in which she recreates the rooms at the Alexander Maconochie Centre, where she was incarcerated on remand for 14 months after she and two of her sons were accused of the alleged murder of her mother-in-law at their Red Hill home in 2015.

The three were granted parole in 2018, went to trial the following February and were acquitted in April 2019, but the effects linger on.

In recreating a three-dimensional space, Beowulf’s youthful interest in drama – she performed in “Hamlet” at Wesley College while studying English at Sydney University – has come to the fore and she’s been busy buying props, including a metal toilet.

Though best-known as a painter – her portraits of Nancy Wake and Donald Horne are held by the National Portrait Gallery – she sees herself as “more a sculptor”, so has been particularly enjoying re-making the water-cooler she crafted while inside, out of old Styrofoam boxes joined with Canberra Milk sticky labels.

Being accused, arrested and locked up is the stuff of most middle-class Canberrans’ nightmares.

“Until you’re in that position, you don’t know how incredibly powerless you are. I’d never even had a traffic infringement notice,” she says. 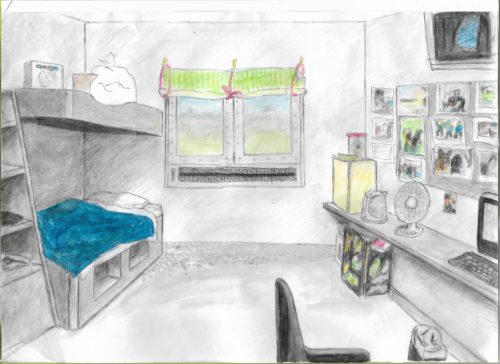 But strangely, she wasn’t depressed in prison, instead trying to make use of whatever was available – the aforesaid Styrofoam, the reverse side of flyers and some lined paper offered to her by a guard, while mastering the elaborate barter system called the “buy up”.

Beowulf, with her growing family and her late husband, Thor, whom she had met at Sydney Uni, had moved in the late 1980s to Canberra, where she worked as an administrator in both public and private entities, while co-directing an art and bonsai business with Thor.

Initiated into the local arts scene by painters Julie Ballis and Cynthia Watsford, she sold work at the old Bus Depot Markets, joined Leichhardt Street Studios before it became M16 and found herself in demand for portrait commissions.

Among her earlier portraits in 1998 was one of NSW politician and former broadcaster Pru Goward, completed after a colour workshop with artist Romola Templeman.

Her portrait of painter Ken Done, a prickly subject at first but eventually accessible and wickedly entertaining, was shortlisted for the 2000 Archibald Prize.

She learnt while painting the former director of the National Gallery, Brian Kennedy, that “the eyes capture the person”, so zoned in on his “Irish twinkle”. That won her a place in the Archibald Prize’s 2001 Salon des Refusés.

The Nancy Wake portrait came about after a conversation with her father and stepmother, who lived near the famous “White Mouse” in Port Macquarie. With help from the RSL, she got in touch and Wake invited her to stay in her third floor unit for a weekend.

“She was an incredible heroine, doing exciting things,” Beowulf says.

The resulting portrait was a finalist in the 2002 Doug Moran National Portrait Prize and, on the recommendation of Portrait Gallery director, Andrew Sayers, who had been a judge, it was acquired by the NPG.

Thor had died of pancreatic cancer in 2015, then later in the same year, she and her two older sons, Thorsten and Bjorn, were detained suddenly.

Beowulf has much to say about her time inside, with positive features including a short stay in a “cottage” section with access for fresh air, enjoyable “big day out” visits to the library and attendance at legal workshops with final-year ANU law students, later dropped for the women, at least.

Much older than most of them, she was very touched when her fellow inmates, many of them young Indigenous women, gave her a 61st birthday party with streamers and whatever they could manage. In turn, Beowulf crocheted headbands and vanity bags for them.

The public perception that modern prisons are luxury accommodation, she says, is “complete garbage”, but she did eventually get access to a simple computer and restricted access to email, allowing her to research her case, but it was an uphill battle since most of her personal property had been confiscated.

One blessing was that her two older sons Thorsten and Bjorn were locked up together in Alexander Maconachie and she was able to see them on a regular basis.

Once bailed, she was accommodated by supportive friends, whose spare bedroom she turned into a research office while she prepared their defence.

Acquittal wasn’t as joyous as you’d expect, with negative media coverage, she says, “I felt like a fish floundering on the beach with the seagulls circling”.

She has tried emulating the resilience of Lindy Chamberlain-Creighton and now, as she reassembles her belongings, including a lot of dying bonsai plants and Wollemi pines, she has the consolation of her boys, a family retreat near Bermagui, a new rescue dog – and a new exhibition.