FOLLOWING in the perplexing new tradition of naming festivals with enigmatic titles full of personal pronouns, like “Where You Are”, “I am Me” and You Are Here”, Kambri at ANU is hosting a summer-long festival of art called “Here I Am”.

The subtitle, “Art by Great Women”, reveals the focus of the event, billed as “a new festival celebrating women creatives” intended to bolster creative women and hold their work up to acclaim.

If that sounds rather like the mission of the National Gallery of Australia’s summer blockbuster, “Know My Name: Australian Women Artists 1900 to Now”, that’s no accident, as Kambri has partnered with the NGA in an initiative which Bill Dimas, co-founder of aMBUSH Gallery, hopes will become a regular event on the Kambri calendar. 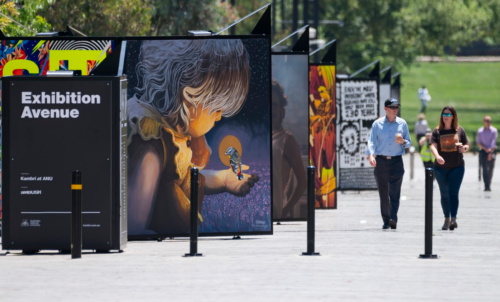 There are free public events across the Kambri precinct, with free parking on weekends, outdoor public art and gallery exhibitions, live art and music, talks and film screenings.

But primarily “Here I Am: Art by Great Women” is a showcase for more than 30 contemporary women artists showing street art, fine art, photography, illustration, digital, sculpture and film.

One such is “She/Her” by Gemma O’Brien, a large two-panel painting of the artist’s chosen pronouns, a way, she explains, of showing openness and respect, and disrupting gender assumptions.

The central Kambri Lawn is home for the duration to female artists creating new work, while throughout the second half of January, Kirrah Amosa, Kim Yang, The Differs Band, singer-songwriter MCKY and Lucy Sugerman will prove that Canberra girls rock in Kambri’s free “Music on The Greens”.

In January, the Kambri Film Fest runs through January into early February, with two free screenings a day in the Kambri Cinema across three weekends of films starring heroines and films directed and written by women.

On January 30, Lakespeare & Co will stage a preview performance and interactive rehearsal of Shakespeare’s “Measure for Measure”, presenting a contrary view of Shakespeare’s grim and arguable misogynistic text by highlighting “bold female leaders in this black comedy by the Bard”.