PHEW! Rational, moderate Americans now know what it’s like to dodge a bullet. 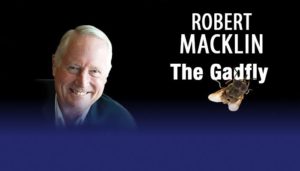 Trump’s attempted coup, culminating in a riotous attack by his supporters on the Capitol building, was the last gasp of a disgraceful presidency.

Or was it, perhaps, the forerunner to that country’s slide into a state of aggressive, uncompromising, debilitating division?

It came from a population where only 32 per cent accept the reality of evolution by natural selection.

The others believe in either a biblical “young earth” or creationism by design, the designer being that supernatural character they invoke with their endless cries of “God Bless America!”

Little wonder that 74,223,744 of them voted for the inventor of ‘“Fake News”. Objective truth in America has become an optional extra, like collard greens.

​The coup’s leader was supported by a majority of House Republicans and many senators in his vainglorious attempt to overthrow Joe Biden’s victory, doubly confirmed that very day with the election of two Democrat senators from Georgia who gave him a workable majority in both chambers.

​The bullet went whizzing by.

​However, America is not out of the woods. From coast to coast, it’s ravaged by COVID-19; and despite the arrival of vaccines, the worst is yet to come.

The Trump administration has fumbled the vaccination program just as it botched every other element of resistance to the virus. The case load has long passed 21 million and the death toll climbs inexorably towards 400,000. And that’s before the new British variant takes hold.

Until January 20, the incoming Biden administration can do nothing to speed up the program nor take the necessary emergency action to slow the spread. And who knows what new mischief Trump will get up to before that vital moment when, or if, the new President-elect takes office.

One presumes that 78-year-old former Vice-President has had his Pfizer shot. That should get him over the starting line. But will Biden’s fragile constitution withstand the immense pressures of the presidency for a four-year term – let alone a second round? Every time they play that clip showing him trying to run to the microphone like a clapped-out Cliff Young, I find myself holding my breath till he reaches it.

Curiously, the possibility of his untimely demise hasn’t triggered a single note of concern from the scores of US columnists and pundits who have probed every other aspect of the political imbroglio. Yet we could be on the threshold of a Kamala Harris presidency that would transform the political equation.

Domestically, it would galvanise Trump and his followers to re-enter the presidential race.

He’s already called her a “monster” and couldn’t possibly resist a return to the ring with a woman in the blue corner. (Though I’d bet the house that she’d knock him out in the first round). Either way, the clamour of hatred from the Trump Republicans would further weaken America’s international standing.

Australia’s US relations will not be helped by either our happy-clappy Prime Minister’s toadying to Trump nor his government’s persistent climate change denialism. However, if they run true to form they’ll respond to Biden-Harris with a grandiose announcement of a 2050 carbon neutral target, then quietly consign it to the never-never basket.

Meantime, those rational, moderate Americans will know that they cannot relax – the bullet Trump fired this time only just missed. He can now take his time to adjust the sights.

Nathan Schmidt - April 9, 2021
0
Gungahlin may be home to the ACT’s second youngest median population, but up until yesterday (April 7) the rapidly-growing suburb lacked a dedicated space for youth.