AN athletics field that produced a two-time national champion and dual Olympian along with a range of local sporting heroes could be bulldozed for a car park after a service club proposal goes under government planning consideration.

The development application in Kambah was submitted to build nearly 100 car park spaces directly on the land run by Tuggeranong Little Athletics.

The proposal would wipe away around 25 per cent of the oval that stages three shot-put rings, a long jump and triple jump sand pits while losing some trees and green space.

The Little Aths association plans on submitting a response to the ACT’s planning authority to block the Burns Club’s submission prior to its deadline on Monday (May 17) after failing to reach an agreement amid negotiations that have run for close to two years.

The Burns Club has stated its reason for the development was to diversify the business to develop a “new revenue stream” and reduce its reliance on gaming machines.

“That’s what successive governments in the ACT wanted and that’s what we as clubs want,” Burns Club chair Athol Chalmers said.

A new car park would be located off Kett Street on public land before the Canberra Scottish heritage club considers turning its southern block of land that holds 53 spaces into a new business venture.

“We want to develop that block into another facility – it could be a childcare centre, could be apartments or townhouses,” Mr Chalmers said.

The club has the consensus of approval with nearby residents and other users of the oval, but not those of Tuggeranong Little Athletics despite drawing up a number of options and an offer to pay costs of a relocation of rings and pits on a field measuring about 1500 sq m.

A new car park that the Burns Club would pay for out of its own pockets would also bolster security concerns with fixed lighting and CCTV cameras an additional feature.

“We went out to local residents and invited them to discuss the proposition with us because you’d want to go in to this knowing how people feel and the feedback we got was this will be good having a lit car park,” Mr Chalmers said. 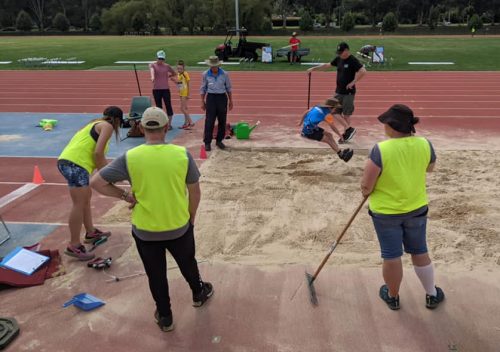 Tuggeranong Little Athletics Association president Barbra Miels-Barrett is heading its own grassroots campaign that tugs on the heartstrings of support for not robbing aspiring little athletes of their dreams amid the delayed Olympic year.

The fields were the location where Australian sprinter Melissa Breen carved out an athletics career that has included the 2012 Beijing and 2016 Rio Olympics, and reaching the 100m semi-finals at both the 2014 Glasgow and 2018 Gold Coast Commonwealth Games.

A number of past and present Canberra Raiders and ACT Brumbies were also listed to have participated in athletics at Kambah before turning their hand to either rugby code.

“These facilities are currently used by Tuggeranong Little Athletics Association every week during the athletics season, with no additional facilities of their kind currently located on the oval in Kambah,” Ms Miels-Barrett said in a statement.

“The development application does not state these facilities will be demolished, nor does it identify where they could be relocated on the oval.

“However, any of the facilities that are relocated would need to comply with world athletics
standards to ensure the safety of our children.”

An independent planning and land authority is assessing the application against relevant provisions of the Planning and Development Act 2007, and the Territory Plan.

Paul Dorin - June 14, 2021
0
Cartoonist PAUL DORIN wonders what it will take for some people to get the jab.