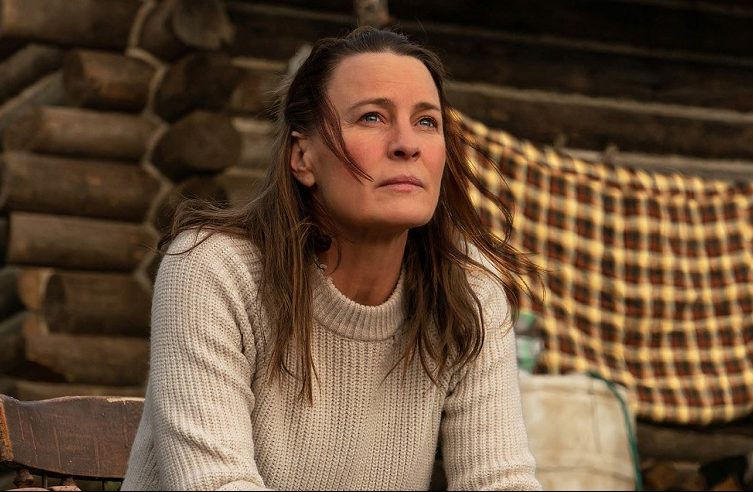 THIS is a “nice” movie. What’s nice about it? Its dramatic structure is simple. It’s credible. It doesn’t demand more of the filmgoer than the filmgoer might be prepared to give.

It doesn’t emblazon the screen with over-the-top, adrenalin-stimulating, look-at-me moments. And its run-time including closing credits is a comfy 89 minutes.

That’s not to say that it lacks conflict or its own kind of excitement.

So what’s it about?

Edee (producer/director Robin Wright) has bought herself a remote Wyoming bush block (it’s actually in Alberta, Canada). She wants to be alone.

The screenplay by Jesse Chatham and Erin Dignam is in no hurry to tell us why. Instead, it obliges us to wonder why a woman from an urban environment wants to escape friends and live alone well clear of 21st century comforts (but not a couple of cases of canned food).

She can’t handle an axe so can’t split the firewood she will need when bitter winter comes (nor the saw she must use to cut logs into billets before even thinking about splitting them.)

For long passages, “Land” observes Edee’s hermit lifestyle, building up the question, why? From time to time, flashes of memory provide fragments of explanation for the quick-eyed and eared viewer to build a picture.

Then a visitor from the outside world arrives to disturb her solitude. Miguel (Demián Bichir) has heard about this crazy woman. He’s a competent outdoors man who’s prepared to teach her survival stuff and provides a dog to keep her company while he’s away dealing with his own issues.

The tenor of the narrative seldom rises above even. Neither of them is looking for romance. But the film avoids exaggerating a strong current of friendship.

I came away from “Land” feeling well satisfied. Will you? That will depend on the expectations you take into it. When you think about it, that criterion applies to just about everything in life, doesn’t it?

Andrew Mathieson - May 11, 2021
0
IT'S a feeling, a hype, a preparation, a match the ACT Brumbies have done over again, but no less thoughts are spent on the final before running onto the pitch, laying a tackle or throwing a pass and imagining holding up the silverware again.