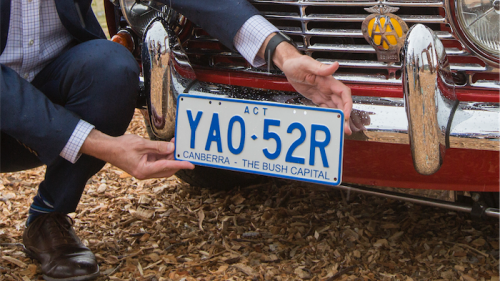 NEARLY 19,000 Canberrans have been left out of pocket after being forced to wait additional weeks for number plates to arrive in the mail.

It can be revealed that motorists will not be compensated for costly delays despite paying their registration fees on time following a request in Belconnen fell on deaf ears.

The closure of Access Canberra centres last year during COVID-19 restrictions prevented the picking up of plates on the day of the payment.

Opposition spokesperson for Regulatory Services Peter Cain wrote to Minister for Business and Better Regulation Tara Cheyne, requesting the date of rego bills be pushed forward to the day many Canberrans received their number plates in their letterboxes.

Ms Cheyne's department declined the request and the expiry of registrations will be set from the earlier payment date.

Mr Cain was critical of the decision, calling on the ACT Labor and Greens government to "better regulate" and cut the unfair red tape.

"A month's car registration makes a big difference to the family budget. It is disappointing that the government isn't more sensitive to the pressures on household budgets," he said.

"While I fully support and understand the measures that were put in place during the restrictions, Canberrans should not have to pay for services they are not receiving.

"This is a chance for the minister and the government to do the right thing and ensure Canberrans are getting what they've paid for."

The government could funnel an extra third of revenue on three-month registrations.

The longest average delays for plates were the 57-day wait for trailers, followed by 31 days for light vehicles and 30 days for motorbikes.

Diplomats vehicles only had to wait six days, the second shortest delayed period.

From April 6 to July 17 2020, Access Canberra was operating under restrictions associated with the COVID-19 public health direction where customers were unable to attend service centres during this time to collect new number plates

But in an attempt to "minimise disruption to customers", Access Canberra had temporarily modified its service model to reduce physical interactions and to limit movement of people.

Access Canberra has resumed normal registration plate arrangements, allowing customers to collect their number plate at the time of their transaction.